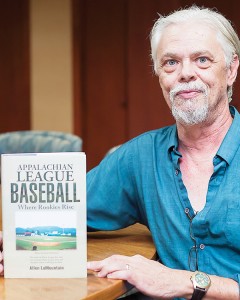 Allen LaMountain sheds light on Appalachian League players who made it to the bigs.

After covering the Appalachian League for 16 years, Allen LaMountain felt there was something missing.

Not from the game but recounting the history of the league.

That is the reason the sports reporter decided to write Appalachian League Baseball: Where Rookies Rise.

“As time went on I kept seeing players in the Major Leagues that I could look back to and say ‘Hey, I remember him,’” LaMountain said.

“I know in going to these Appalachian League parks that the fans feel the same way, they feel a kinship toward the players that came through their organizations’ system,” he said. “They feel a sense of proud of like, ‘I knew him back when’. And that is what kind of sparked me a little bit.”