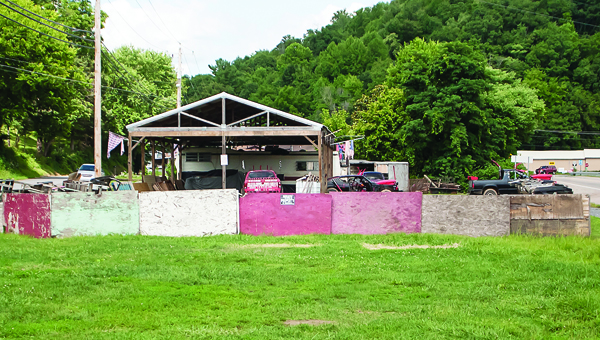 This property on Highway 400 has been the subject of much discussion by the Planning Commission. On Tuesday the commission approved giving the property owner “one more chance” to correct issues with the property before pursuing legal action through the county attorney.

One more chance.
That’s what the owner of a Carter County property is getting after Tuesday’s meeting of the Carter County Planning Commission.
Commissioners are no strangers to the location, a road-front property on Highway 400 near its intersection with the Bristol Highway.
At May’s Planning Commission meeting, County Planning Director Chris Scheuttler said he and Codes Enforcement Officer Chris Pierce have both had conversations with the owner about issues at the property.
“We have had discussion after discussion with this individual,” Scheuttler said in May. “That thing has so many violations.”
Among the violations, according to Scheuttler: No permit was obtained for the building that was constructed; the property owner does not have a permit to operate a flea market at the location; issues with sewage; and barricades erected around the premises appear to be on the state right-of-way for Highway 400.
On Tuesday, Scheuttler told commission members the owner has made no effort to correct issues with the property.
“We placed a stop-work order on the property,” Scheuttler said, adding his office will give the property owner “one more chance” to correct the issues.
Scheuttler said his office will be issuing the property owner one more letter asking not only for the issues to be corrected, but for the property owner to also provide the Planning Office with proof of survey, proof of septic, proof of a business license and proof of a highway access permit from the Tennessee Department of Transportation for the connection to Highway 400.
“This is a situation we may have to take to Chancery Court,” Scheuttler said.
In May, the Commission voted to send the property owner a “final letter” letting the owner know if issues were not corrected the matter would be turned over to the county attorney for possible legal action.
Scheuttler asked during Tuesday’s meeting that the commission grant him permission to work with county attorney Keith Bowers, and if the issues are not resolved within 30 days of receipt of the final letter, that he and Bowers can proceed with legal action.
Commission member Ralph Watson made a motion to grant Scheuttler the permission he asked for. The motion received a second from member Russell Kyte and passed unanimously.
The commission also voted unanimously to give Scheuttler permission to work with Bowers to obtain a resolution to a storm water and drainage issue on a property on Holston Mountain Road.
Scheuttler also presented the commission with a training schedule for employees of the Planning and Zoning Office. During the commission’s June meeting, Steve Pierce requested that Scheuttler provide the commission with a timetable for employees to obtain the training needed to be certified to conduct inspections.
In a housekeeping issue, the commission voted unanimously to update the fee schedule which had previously been approved by the commission in 2010.
Scheuttler said the fees for the office will not change, because his office charges fees as set forth in the state’s fee schedule. He said this was to update the county’s policy on the fee schedule.
Members of the commission also heard about complaints from the owners of Serenity’s Edge campground regarding noise issues with the nearby Elizabethton/Carter County Animal Shelter.
Scheuttler provided the commission with copies of the plans for the animal shelter’s building.
“We have no control over this,” he said. “These were the plans that were looked at and approved.”
“We could pass a noise ordinance and put it in the zoning code,” he said, “but I think it would be extremely hard to manage and enforce.”
Scheuttler noted that the plans for the animal shelter did call for a line of trees to serve as a noise-reducing barrier. “It was planned for a buffer, but only part of it was planted,” Scheuttler said, adding that some of the trees which were planted have since died.
The planning director said he was “at a loss” as to what the Planning Commission could do in response to the complaints made by the campground owners. The commission took no action on the issue.

County Commission Chairman Tom “Yogi” Bowers, at left, responded to a ruling by the state attorney general by saying the... read more