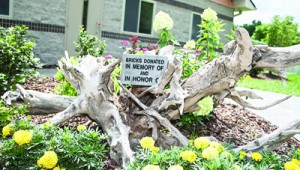 After years of planning and fundraising, the Memorial Garden at the Elizabethton/Carter County Animal Shelter is in place.
The Memorial Garden features a stone-paved walkway with memorial or honorary blocks leading to the facility along with a landscaped area along the pathway.
“The memorial looks really nice,” said shelter Director April Jones. “People are already walking on it and we have had a few comments about how nice it is.”
The Friends of the Animal Shelter started planning for the memorial when the plans for the new building itself were in development. The memorial centers on decorative bricks that can be bought in memory of or in honor of a person or a pet.
Friends member Meg Brown said that these bricks are still for sale and would be added to the Memorial Garden as they are purchased.
“They can be bought for a person or a pet, however people want to do it,” Brown said. “When a new brick is bought, we will take a blank brick from the walkway, have it engraved and then put it back.”
Bricks are $50 each, and all money raised goes toward the ongoing costs of operating the animal shelter.
Forms to buy a brick are available at the shelter, at 135 Sycamore Shoals Drive.
Brown said landscaping and most of the labor was donated by Jonathan Houser with River Gardens Landscaping.

The old saying says music soothes the savage beast. But will that music serve to soothe the barking dog? That’s... read more