Machines signed, sealed and ready to be delivered to polling places 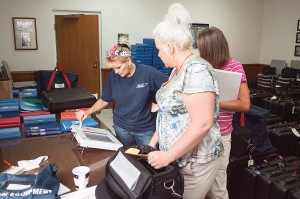 Polls across Carter County will open up Thursday morning for Election Day and officials are working hard to make sure they open without a hitch.
On Tuesday morning the Carter County Election Commission made the voting machines available for inspection by any interested candidate, the county executives of the political parties and the media. The inspections take place under a provision of state law so that interested parties may inspect the machines to verify they are properly set up, are in accurate working order and that the machines are set at zero.
Once inspected, the machines are then sealed by the Election Commission. Those seals will remain intact until the machines are opened at the poll location on Election Day.
Only one candidate sent a representative to the machine inspection on Tuesday morning.
The voting machines, supplies and signs will be packed up and each precinct will pick up their equipment on Wednesday to transport it to the poll sites where it will be secured overnight before being set up Thursday morning.
Administrator of Elections Tracy Harris said prior to opening on Thursday morning, each polling site will run “zero tapes” to show that no votes were cast on the machines prior to the opening of the polls.
On Election Day, voters will select their candidates for not only the county’s general election, but also the state and national primary elections as well as judicial retention questions.
Harris advises voters to be prepared for long lines at the polls and wait time because of the length of the ballot. She also reminded voters to bring their Tennessee or federal photo identification with them in order to be able to vote.
Nearly 6,000 residents took advantage of early voting, which is held at the Carter County Courthouse. On Election Day, Harris said, voters must vote in the precinct where they are registered, so only those individuals who live within the precinct which votes at the courthouse can cast their votes there on Thursday.
During the May primary election, city schools were in session and voters at the Westside, Eastside, Harold McCormick and High School precincts reported experiencing issues with parking at the precincts.
For this election, city schools will be in session for a half-day with classes dismissing at noon. Voters in those four precincts may experience parking issues if they go to vote while school is in session.
The school year for Carter County Schools does not begin until Monday.
The polls will open at 8 a.m. on Thursday and will remain open until 8 p.m. Individuals who are in line by the time the polls close at 8 p.m. will be allowed to vote.
Unofficial elections results will be announced Thursday night.
Results for the four county general election races which have certified write-in candidates may not be known on Thursday night if there are more write-in votes than votes for the candidate on the ballot. Harris said this is because the printouts from the voting machines on Election Night only list the number of write-in votes cast and election workers must hand-count the write-in votes to determine who the write-in vote was cast for.
Election officials will begin counting the write-in votes at 8 p.m. on Thursday after the polls close.

An investigation is underway and the Elizabethton Police Department is asking for the public’s help in identifying a subject. Investigators... read more