Recruiting, revenue & relationships: Incumbent says operation must be run like a business 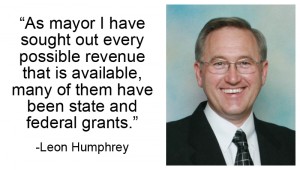 A mayor should help bring revenue into the county and see that the county’s operations are run like a business.
That’s the opinion of current County Mayor Leon Humphrey, who is seeking re-election to a second term in Thursday’s general election.
“As mayor I have sought out every possible revenue that is available, many of them have been state and federal grants,” Humphrey said, citing grant monies obtained for improvements around the county such as the paving of roads and restoration of historic windows at the county courthouse.
Searching for revenue is essential to helping the county provide needed services while lessening the burden on the taxpayers, he said.
“Ever since I got out of high school and got a job I was taught I have to earn my keep,” Humphrey said. “In four years I have brought in enough to cover this salary for about 10 years. I’ve not cost the tax payers one cent by being here.”
Humphrey said in his opinion government should be run like a business and everything should be public so the citizens can stay informed and involved with those elected to represent them.
With the economy in the shape it is, Humphrey said, the county has a duty to be as fiscally responsible as possible. He said he has worked to reduce costs to the county and has absorbed all of the mandated increases in his budget without requesting additional funds.
“Theirs (the commission) is more of a tax and spend mind set and mine is more of a do more with less mind set,” Humphrey said. “When times are good tax and spend may be OK.”
Education is also an important county issue, Humphrey said.
“I have lived in Carter County all my life,” he said. “I myself am a product of the Carter County school system and my children are products of the Carter County school system.”
“I want the very best for my grandchildren and great-grandchildren,” he added.
Humphrey said he feels the school system needs to develop a long-range capital improvements plan that addresses all the needs and that plan can be broken down into segments for completion. “Once that plan is developed and presented, by all means we all need to get behind it and make it happen,” he said.
Leadership is an important skill, not just for the mayor, Humphrey said, but for any office holder. “I think each and every elected official has a leadership role,” he said. “We all need to take leadership positions.”
Humphrey also addressed criticism he has received over his working relationship with the current county commission. He said never before in his career has he had trouble working or getting along with co-workers or employers.
“The only problem I have ever encountered is with the County Commission,” he said. “To be very candid, I feel a good number of the old guard did not think I should have won the election.
Humphrey said he feels he has been fighting an uphill battle with the commission from the start of his term, but is hopeful and looking forward to the opportunity for change with the incoming new commissioners. “I am confident we will be able to work together harmoniously,” he said.
While he touted his 25 years of management experience in the private sector as an asset, he said the job of county mayor is a demanding position. “Of all the jobs I’ve ever had, this job has the steepest learning curve,” he said. “It is a 24-7 job because you have to represent all the citizens of the county and be available to them.”
“Being a state lawmaker, a representative, is not the same as being a county mayor.”

Trust. That one word is what Dexter Lunceford used to describe the biggest challenge facing law enforcement in Carter County.... read more