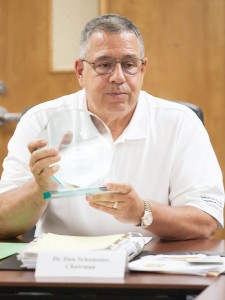 Even though the first phase of the Tweetsie Trail hasn’t officially opened, plans are already in place to extend the trail farther into Elizabethton.
And while the trail will figuratively “pull into the station” with its Aug. 30 opening, a literal station could be a future stop on the route.
Tweetsie Trail Task Force chair Dan Schumaier updated the rest of the task force on plans Tuesday night.
Originally, the first phase of the Tweetsie Trail was to end in the area of Sycamore Shoals State Historic Area. But now, the plan is to extend the trail to Holly Street in the area of Pal’s.
Schumaier said the city of Elizabethton had already graded out the rail bed to Holly Street. He said the goal is to have the surface put down on the new extended area before the trail – the original version – officially opens on Aug. 30.
Grant Summers, with Summers-Taylor Inc., said that once work gets started putting down the hard surface, crews would likely be finished in one day.
“We will have it finished before the trail opens,” he said.
Task force member Ken Gough told members about the possibility of acquiring the Bemberg Station near Elizabethton High School to be converted into a railroad museum, bike shop and snack bar. He cautioned the group that the plans were still very early.
“This is in the very early stages, just past being a pipe dream,” he said. “There are still a lot of problems to overcome before this could happen. There are still more questions than answers.”
Gough explained the property was owned by private residents. He said if they agreed to the sale and the property could be purchased, the plan would be to restore the exterior of the building to as close to original as possible. The interior would be refurbished to make it match the new uses of the building.
Schumaier said he had completed an application to have a portion of the trail from Sycamore Shoals to Gap Creek listed on the National Park Service Victory Trail. The application is being reviewed by attorneys to make sure it will not obligate the city of Johnson City to any further conditions.
Schumaier said the section would be named the Overmountain Victory National Historic Trail.
Steve Darden gave an update on the “Adopt a Trail Section” program.
He said currently, three groups had signed up to adopt sections of the trail to help maintain it: Milligan College, Happy Valley Baptist Church and Betsy Bikes.
“We are not asking these people to do any heavy maintenance,” Darden said. “We expect that people who use the trail will not litter. We think they will be conscious of that. This is a great service for the trail.”
He said there is room for more volunteer groups to sign on as trail section adopters. He said the exact sections, length of service and other details would be worked out when more volunteers had the opportunity to sign up.
Anyone interested in adopting a trail section can contact Darden at 283-6303 or at sdarden@hsdlaw.com.
The task force is continuing to prepare for the opening day of the Tweetsie Trail on Aug. 30 with the Tweetsie Trek. Schumaier said most parts of the trail would be in place but gave notice that the benches, bench plaques, bricks and flower beds would not be completed by then.

The Tennessee Department of Veterans Affairs will host a veterans outreach event on Aug. 15, from 10 a.m. to 2... read more