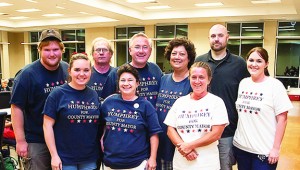 A familiar face will be found in Carter County’s mayor’s office for the next four years after Carter County Mayor Leon Humphrey retained his seat with a hard-fought campaign for the county’s top office.
Humphrey led the race, gaining the lead in early election totals and holding it as all the precincts continued to roll in.
Humphrey finished with 6,750 votes over state Rep. Kent Williams, who garnered 6,054 votes.
“It has been an extremely hard day and a difficult election,” Humphrey said. “It has been a hard election having to counter the untruths that were spread during the election, but I want to stay on a positive note. I am thankful for the vote of confidence that was shared for me by the county’s voters.”
Humphrey said his convictions were “stronger” than when he was first elected in 2010. He said there was a “tremendous” level of opportunity for improvements and chances to move forward in the county.
“I am going to give it my utmost,” Humphrey said. “We need to embrace the commission that is coming in. We need to work together for the best interest of the community.”
Humphrey said he was going to continue to work toward the goals he had set out to achieve when he was first elected.
He said he was going to work toward identifying new revenue streams to help take some of the tax burden off of property owners. He said he would also like to see a long-range plan incorporated for the county that would look at making improvements to infrastructure. He said it would also be a goal to bring in new industries and businesses.
“When there were good economic times, there has been no investment in infrastructure,” Humphrey said. “The long-range plan will not happen overnight, but it is something that we need to look at.”
Humphrey added he was going to continue to improve efficiency in his office and hoped that other office holders would take the chance to do the same. He said he had turned in a balanced budget for the four years he had been in office without having any additional funding coming in.
“I am convinced by winning this election, with the reputation and experience of my opponent, that the tide has finally started to turn toward transparent and accountable government in Carter County,” Humphrey said.
Williams could not be contacted for comment before deadline.

Photo by Brandon HicksKen Gough, a member of the Tweetsie Trail Task Force, describes the trail during a presentation Wednesday... read more