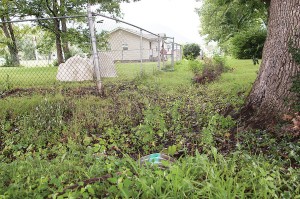 Carter County is working to overcome an issue delaying the relocation of a ditch in the Braemar community needed to alleviate water drainage issues.
Members of the Highway Committee heard from several residents in the area, as well as County Planning Director Chris Scheuttler and Assistant Road Superintendent Shannon Burchett regarding the project.
According to Scheuttler, the plan is relocate a drainage ditch that runs through an alleyway on a county right-of-way between Dennis Cove Road and Melrose Street in Hampton.
The alleyway that runs behind the houses on those two streets is used by the county for drainage issues, according to Scheuttler.
He also said portions of the ditch are on private property. The project will move the ditch onto the county right-of-way and will redesign the cut of the ditch to increase the water flow in the area to improve draining issues. Scheuttler said the redesign will also allow the county to maintain the ditch line, something it hasn’t been able to do in the past.
Scheuttler said the ditch will be cut into a very wide but shallow V shape to allow county mowing equipment to maintain the ditch but also to allow property owners continued use of the alleyway to access their property.
The project was started but now, work has reached a standstill.
“We had a situation with one of the property owners up there,” Scheuttler said, adding the property owner did not approve of the plan developed by the county to relocate and improve the ditch.
Burchett agreed with the assessment by Scheuttler, adding that after work by the county halted, the property owner in question brought in equipment and began digging a ditch line on his own that was not in accordance with the county’s plans for the project.
Several residents who own property along the boundary of the ditch attended the meeting and voiced support for the county’s plan and expressed a desire for the plan to proceed.
Residents also expressed concerns about the lack of proper drainage and the issues with standing water currently encountered because the ditch line needs work to make it effective.
Kevin Ward, who said he owns property affected by the drainage issue, said the problem is worse in the winter when the water running off higher ground flows through the area. He said his home does not have a basement, but he said some of his neighbors do have basements and they experience problems with water seeping into their homes.
According to Ward, residents have mowed and maintained the alleyway for years because they use it to access the rear of their properties. Some residents at the meeting were concerned the alleyway would be closed.
Resident Sutton Brown reminded members of the committee when discussing any changes to the ditch line to also consider other area residents as well. “Any change upstream will affect those downstream,” he said.
In addition to Brown and Ward, three other residents voiced concerns with the drainage issues during the meeting, including concerns with a drainage tile that directs the water flow from the ditch below Castle Street.
Burchett and Scheuttler said the project would look at replacing or improving the drainage tile at Castle Street.
After a discussion, the committee passed two motions to help the project move forward.
The first was a motion by committee member Joel Street to keep the alleyway open for use by the county to alleviate drainage issues. The motion was seconded by committee member Russell Kyte and passed unanimously on a vote.
Following his first motion, Street made a second motion to turn the project back over to the Highway Department and Planning Office and allow them to work together to advance the project and report back to the committee. The motion was seconded by committee member John Lewis and passed unanimously on a vote.
Members of the committee also heard a concern from County Commissioner Ken Arney, who said he was speaking to the committee as a resident but also as a school bus driver for the county’s school system.
Arney expressed a safety concern created by poor visibility at the intersection of Ruby Avenue and Sims Hill Road. He said property owners had planted trees at the edge of the property which limit the view of the roadway by drivers. He said drivers have to pull into the intersection in order to see oncoming traffic.
Highway Committee Chairman Buford Peters said he would speak with the county attorney regarding the issue to see if the county had any recourse to ask the property owners to trim the trees to increase visibility.

Library will host trio of Summer Fun sessions next week

What fossils can I find in East Tennessee? How can I be healthier? Am I prepared for severe weather? A... read more