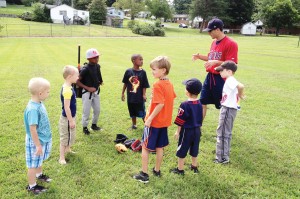 It’s time to play ball, have a party in the park and pick up some Elizabethton history, to boot.
The Elizabethton Parks and Recreation Department will host its annual Youth Baseball Clinic and Party in the Park at the Blue Grays Field at Douglas Park.
The Party will be held this Saturday, Aug. 16, from 10:30 a.m. to 2 p.m.
Parks and Recreation Director Mike Mains said the annual event will feature a whole lineup of activities for the youngsters to participate in.
The main portion of the clinic will include several Twins baseball players, who will work with the participating youth on the fundamentals of baseball. There will also be a time for autographs, inflatables and a free lunch. Rookie the Twins mascot and entertainer Mr. Bill will also be at the event.
Mains said the event has grown into an annual attraction for the department that draws in more participants each year.
“We hope to see a lot of families out and taking part of the clinic and the party,” Mains said. “There’s no better place to have that than the historic Blue Grays field.”
And Mains said a portion of the day will be devoted to sharing the field’s history.
The Blue Grays Field was the home of Elizabethton’s black semiprofessional baseball from 1935 to 1955. The Blue Grays were a barnstorming team, meaning they traveled throughout the South playing road games. The Blue Grays had players from Elizabethton, Johnson City, Kingsport, Bristol, Greeneville and other areas in surrounding states.
“Hopefully the youth will take some of that back with them,” Mains said.
The party portion of the day is open to all ages and families are encouraged to attend. The ball clinic is recommended for youth ages 4 to 15.
For more information call the Parks and Rec Department at 547-6441.

Time for some preventive care?

Carter County’s school system’s employee health insurance policies will be getting a facelift, but this operation won’t be elective surgery.... read more