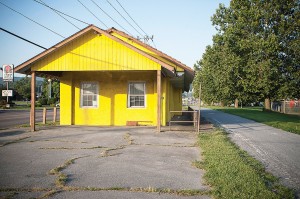 Elizabethton’s City Council heard a little bit of history Thursday night and was urged to consider making a little history of its own.
With Tweetsie Trail’s official opening scheduled to arrive in just a couple of weeks, Tweetsie Trail Taskforce member Fred Alsop updated council members on the trail’s progress, but with a focus on the future.
With most of the trail from Johnson City to Holly Lane in Elizabethton complete, he talked about using the old Bemberg Station as the trail’s anchor location in Elizabethton.
Task force members have discussed turning the yellow stucco building across West Elk Avenue from Sonic and Taco Bell into an official trail stop in the past. But they’ve noted that the property is privately owned and that the plans are still in the very early stages of discussion.
“A lot of this is knowing what this trail could be,” Alsop said. “A good portion of this trail is in Carter County.”
He told council members about the historic significance of the Bemberg Station; It’s one of just two remaining East Tennessee Western North Carolina Railroad stations.
The station was first opened in 1929 and was originally a boxcar set up beside the rail line. The station was built after the Bemberg and North American Rayon factories were opened and it became apparent the railroad would be used frequently.
An old photo included in Alsup’s presentation showed the station was once called Port Rayon instead of Bemberg Station. The presentation also included pictures of the station as it originally looked, with an open-air covered patio at the western end of the building to give passengers a place to wait outside without being in the weather.
The original floor plans for the station show an indoor waiting area, an office with two restrooms and a freight room on the eastern side of the building.
Alsop pointed out that the building was stucco from the beginning, but was a dark green, not the bright yellow it is today.
“There are a lot of possibilities that could be put in to place here if you have the vision to make it happen,” he said. “This could be the Elizabethton anchor of the Tweetsie Trail.”
He continued that the building could be used as a museum, gift shop, rest area, snack bar or informational stop for trail users.
Alsop added that if the building was restored to its original appearance, it could also receive a designation as a historic structure.
“This is something the community could rally around,”Alsop said. “It could be an excellent addition to the trail. The building is worth preserving because there is no other building like it. If you want to make it happen, it needs to start here.”
In other Tweetsie Trail news, Council gave approval for theTweetsie Trek, a 4.3 mile run/walk/bike ride, for Aug. 31. The Tweetsie Trek is the grand opening event for the Tweetsie Trail.

It’s been a good summer for Elizabethton’s Franklin Pool. And to celebrate, the Elizabethton Parks and Recreation Department is inviting... read more