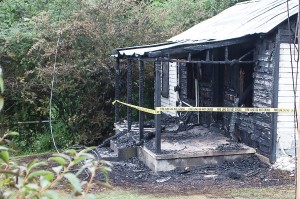 Two early morning fires in Stoney Creek are being investigated as suspected arson by the Carter County Sheriff’s Department.
CCSD Investigator Jeff Markland said the fires at 161 and 163 Grace Lewis Road in Stoney Creek had been assigned to an arson investigator as of Monday morning.
“The fires were suspicious in nature, and the investigation is ongoing,” Markland said, adding that no other information was available Monday afternoon.
The CCSD and the Stoney Creek, Hampton and Watauga volunteer fire departments responded to the first fire at 161 Grace Lewis Drive after 2 a.m. Monday.
Ray Lewis, who lives at 157 Grace Lewis Road and is the owner of the property at 161 Grace Lewis Road, reported that he was awake around 2 a.m. when he heard a car door slam.
“Mr. Lewis stated he looked outside and seen a beige colored car backed into the driveway beside of 161 Grace Lewis,” CCSD Deputy Brian Smithpeters wrote in the incident report. “Mr. Lewis stated the vehicle then left. Mr. Lewis stated a short time after that he seen the smoke and flames coming from the residence.”
Stoney Creek fire department Captain Jason Shaw was cited in the report as being unsure of what had caused the fire at 161 Grace Lewis. Lewis informed officers that the home had been vacant for around a year and the electricity had been cut off from the property.
Then at around 5:30 a.m., the CCSD was redispatched the area when a fire was discovered at 163 Grace Lewis Road.
According to the report by CCSD Deputy Roger Brown, the Stoney Creek fire department returned to 161 Grace Lewis to pick up equipment that had been left at the scene. When they returned, a neighbor pointed out that it looked like the home next door, 163 Grace Lewis, was on fire. The Stoney Creek fire department extinguished the fire.
“The fire department informed us that there were five points of ignition at 163,” Brown wrote in the report.
Lisa Hyder, the owner of 163 Grace Lewis, arrived on the scene and informed the CCSD of two suspects she believed could have been involved, both former tenants of the properties affected by the fires.
Lewis’ property at 157 Grace Lewis Road received damaged underpinning and siding from the heat of the fire at 161 Grace Lewis Road.