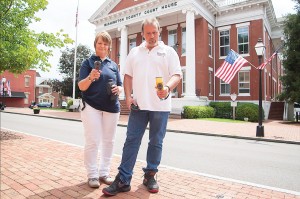 Moving into a new home is supposed to be a happy occasion.
But for members of one family, moving into an apartment on Dennis Cove Road in Hampton in 2011 was not what they expected.
They believed their new home was haunted by multiple spirits.
The family’s experience led them to call Paranormal Technology Investigations in Jonesborough, and the resulting investigation took their story far beyond the apartment’s four walls – to television.
PTI’s investigation will be the focus of an episode of “Haunting” on the Destination America channel that will air Sunday at 10 p.m.
The episode, “Ashes to Evil,” follows PTI co-founders Robb Phillips and Kathy Shephard, and their team as they investigate the reported hauntings in the apartment and try to help find peace for the tenants – living and supernatural.
Phillips said the family lived in the apartment for just a short time before the haunting began and that the home was the site of a fatal fire in November 1996 that killed a mother and her three children. Before that, he said, it was reported to have been a boarding home for recently released convicts.
Phillips said a woman who lived in the apartment, identified as “Amelia,” contacted PTI after her family experienced a host of incidents she chalked up to the supernatural.
He said the family reported hearing voices and arguments from inside the apartment walls, saw full-body apparitions and had clothing and household items disappear, never to be found again.
They also told Phillips that the 3-year-old child living in the home talked to an unseen individual in the bedroom closet.
The family reported even more strange events, such as getting up after hearing noises in the kitchen one night to find all the cabinet doors open with the items, once inside, stacked up in the kitchen floor.
After talking to the family, Phillips and his team agreed to visit the apartment to do their own investigation.
Using a digital recorder to collect electronic voice phenomenon, or EVPs, Phillips said they were able to collect voices belonging to a woman, a child and a demon.
On the night of the investigation, the team recreated the fire in the apartment by lighting paper in a bucket on fire and then moving it outside. He said after that, the activity increased.
After lighting the fire, the team collected an EVP of a man’s voice saying “I didn’t do it.”
There were other voices heard in the apartment that night.
“We’d hear a couple arguing with each other inside the walls,” Shephard said. “Once, team members put their ears up to the wall and there was a massive slap, like that of a sledgehammer from inside the walls.”
Phillips said the spirits also attacked the woman and her boyfriend, and the man “almost became possessed.”
“His eyes rolled back in his head and he said in a voice that wasn’t his, ‘Your God can’t help you now’,” Phillips said.
During the investigation, the woman said she felt light-headed and collapsed to the floor. As team members carried her to a couch, she said her back was burning and they found she had scratches down her back.
He said the team also gave orders to the spirits and received responses, such as a rocking chair moving on command or a noise being made in a specific room of the house.
“We determined this was a full-blown haunting with a demonic presence in the house,” Phillips said. To correct the issue, he said the team blessed the house and held a crossover ceremony to help the spirits move over to the “other side.”
Shephard said some of the presences in the home were likely there as a result of the fire, but they didn’t know exactly where all the spirits originated.
“When we did the EVPs, we picked up a little girl that said, ‘I see that light’, she said. “It is likely she was talking about the fire.”
Unfortunately for the family, the first blessing did not stick, and the paranormal team had to return to Hampton and try again.
Phillips said that since the haunting occurred in a multi-unit home, the spirits could have relocated to another apartment –leading to the voices in the walls –only to return after the team left.
“It was good for a while, but then they came back,” he said.
The family left the apartment and lived with Shephard for a short time while looking for somewhere else to live. She explained they didn’t have anywhere else to go on such short notice.
Phillips said they do the investigations for free to help families and earn their living by hosting historic ghost walking tours or ghost hunting tours around the area.
The team will also be the focus of another “Hauntings” episode that will air in September or October. Phillips said the team has been in discussions with Destination America about the possibility of having a television series focused on the team’s investigations.

Students at Elizabethton High School got a peek at what it takes to be a Navy SEAL during a special... read more