All aboard! Tweetsie Trail under way 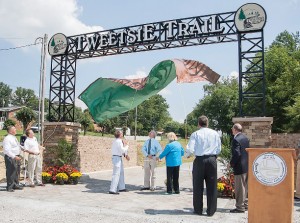 “We’ve got a trail folks!”
With that proclamation from Johnson City Mayor Ralph Van Brocklin the Tweetsie Trail, a walking and biking trail connecting Johnson City and Elizabethton, officially opened Thursday afternoon.
Work started on completing the Tweetsie Trail a little more than one year ago in June 2013. The first phase of the project stretches from Alabama Street in Johnson City to near Pal’s in Elizabethton. The ending point in Elizabethton was extended from Sycamore Shoals State Historic Park.
Elizabethton Parks and Recreation Director Mike Mains said the addition of the Tweetsie Trail will be a positive for the city of Elizabethton.
“We already see from the response of the community that people do enjoy having the trail,” Mains said. “We are grateful that it came together and is working for the good of Elizabethton and Carter County.”
Mains said it would be hard to put a dollar value on the recreation opportunities for families in Carter County.
“You can’t put a figure on the enjoyment that families will have using the trail,” he said. “This is a gift for the families of our county.”
Carter County Tourism Coordinator Carl Brickey said the new trail would dramatically increase tourism opportunities for Carter County.
“Statistics show that for families to drive an hour to visit somewhere there needs to be four hours of activity for them to participate in,” Brickey said. “This will open a new area of visitors for Carter County. This is just great.”
Johnson City City Manager M. Denis Peterson described the trail opening as a “milestone event” for both Johnson City and the area.
“This is the long-awaited opening of the Tweetsie Trail,” Peterson said. “For a long time we have talked about the need for more walking and multiuse trails.”
Van Brocklin called the last year of construction on the trail as one of the “best darn efforts” he had seen by municipal employees, private employees and citizens to get a project finished.
“This is one of the best efforts I have seen in my years living in Johnson City of people working together,” Van Brocklin said.
Van Brocklin also commended members of the Tweetsie Trail Taskforce for their work on the project. The group was formed in 2013 with the goal of overseeing the development of the trail. Van Brocklin said the group worked with a “purpose and a passion” to focus on making a “great addition” to the area.
Task Force chair Dan Schumaier said the trail was a “story all about our community.”
He said the community came together to make sure the trial happened, through volunteer work and donations, both monetary and in-kind.
Schumaier said the trail had less than three miles to be completed before the entire 10 mile length of the Trail was finished from Snap-on Tools in Elizabethton until the starting point in Johnson City. He said there were still some finishing touches to be put in place in phase one, such as the benches, memorial bricks and trail shelter areas.
Peterson touted the trail’s potential to improve economic development, provide a safe exercise alternative and increase the quality of life in Elizabethton and Johnson City.
He added the future goal for the trail was to have a system of trails that would connect the area’s state parks. The Tweetsie Trail will soon connect Tipton Haynes with Sycamore Shoals and the historic Covered Bridge. He said in the future the trail could also possible connect to Roan Mountain State Park.