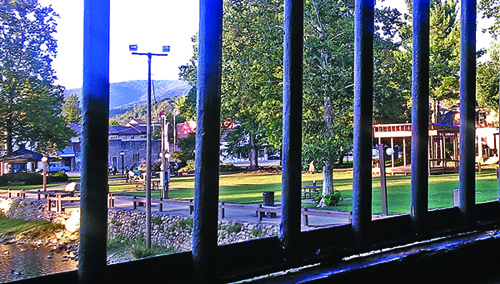 The Covered Bridge Park stage can be glimpsed through a window on the bridge itself.

Curtain up.
After three meetings, a plethora of questions and lots of discussion, the Covered Bridge Park stage won approval from the Elizabethton Historic Zoning Commission. But in keeping with its short-but-eventful life, the go ahead wasn’t without stipulations.
The commission unanimously granted a certificate of appropriateness for the stage on Monday, but with the requirement the roof be changed to a double-pitch roof. Commissioners also asked the city to add sound-muffling aspects like landscaping and wings on the stage.
The stage first appeared on the commission’s agenda in July, after it had already been completed. The city built the stage in the park to host a Fourth of July celebration, and with plans for future community events in Covered Bridge Park.
Commissioner and architect Forrest Bennett said after reviewing the plans, he could find no issues with the stage. He said the stage matched the materials and the architectural surroundings, but noted he would like to see a different roof on the structure.
“I would prefer to see a dual-pitch roof, like that on the Covered Bridge,” Bennett said. “But, it is not up to us to dictate design. It is up to us to enforce the character of a neighborhood and make sure that is followed.”
Commission chair Sarah Baker agreed with Bennett and said a different roof style would improve the look of the stage. She said most of the other buildings in the area, including the gazebo in the park, had dual-pitch roofs.
The stage was built with a single-pitch roof that slants down toward the back of the stage, which Baker said made it look “like a fruit stand.” A dual-pitch roof would have two angled sides that meet together in the center.
Baker asked Planning and Development Director Jon Hartman if the stage included any sound buffering measures. He said the stage would have a back and sides installed later, but no landscaping was included at this time.
“The design should be purposeful,” Baker said. “It should be designed so that the sound from the stage goes out into the audience.”
Elizabethton resident and stage opponent Tom Cowan attended the meeting and asked if a public hearing was included in the proceedings. Baker told him there was not a public hearing. After Cowan continued to speak, Baker told him he would be removed from the meeting if he didn’t stop. Cowan stopped speaking and the meeting continued.
Baker called for a motion on the request for a certificate of appropriateness. Jeff Treadway made the motion the stage be approved with the stipulation the roof be changed to a double-pitch roof and the city look at sound buffering options. Helen Wilson seconded the motion and it was unanimously approved.
The commission also granted certificates of appropriateness for a new roof on a home at 615 Hattie Ave., and brick wall repair for a building at 600 East Elk Ave.

Jake Higgs, at left, was the first daily winner of Carter County Bank’s The Great Shown with Jake is Duncan... read more