Partnerships will focus on workforce preparation 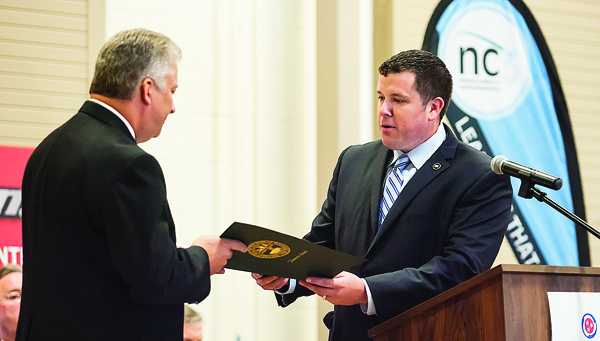 The Tennessee College of Applied Technology Elizabethton campus celebrated its grand opening and announced partnerships with Snap-on Tools, Trane and National Coalition of Certification Centers (NC3) during a ceremony Wednesday morning.
These partnerships allow the school to provide focused technical education training to students to help them become better prepared to enter the workforce.
TCATE campus Director Dean Blevins said the college became a member of NC3 with 27 other Tennessee applied technology colleges and received an additional designation during the process. The NC3 is a network of technical training institutions that partners with businesses and industries, such as Snap-on Tools and Trane.
“The Tennessee College of Applied Technology Elizabethton has taken this endeavor one step farther,” Blevins said. “We are an NC3 ‘Train the Trainer’ southeastern United States Regional Center. We are only one of four in the nation.”
The school will host the first Train the Trainer event in March 2015, when technical educators from across the country will come to TCATE to train on NC3 certification areas and take that knowledge back to their respective institutions.
Blevins also announced TCATE entered a partnership with Snap-on Tools in Elizabethton to deliver industrial plant maintenance training specifically for the Elizabethton Snap-on Tools plant. This training will include machine tool and CMC training that will be added to the TCATE class offerings in the near future.
Another new partnership will provide heating, air condition and refrigeration training with Trane as a part of the NC3 partnership.
“In early 2015, the college will be recognized as a training center of excellence,” Blevins said. “This is a very elite status with only two training centers in the nation. It is these partnerships with global leaders that elevate the college to the next level as a professional post-secondary institution to deliver world-class workforce development training.”
Snap-on Tools CEO Nicholas Pinchuk congratulated TCATE leaders for having the vision to enter partnerships like the ones with NC3, Snap-on and Trane to provide higher education opportunities for students.
He then addressed the students and encouraged them to continue their education.
“There is no greater calling than what you are doing,” Pinchuk said. “America expanded not on the brilliance of the few, but on the efforts of many.”
It was individuals with technical skill throughout history who had made a difference, he said. As examples, Pinchuk referred to General Baker Christopher Ludwig, who kept the colonial troops well fed during the rough winter at Valley Forge during the Revolutionary War; and to Rose Will Monroe, who came to be known as “Rosie the Riveter.”
Pinchuk said the “dedicated, energetic and determined” American workforce will be the key to helping improve and continue economic growth in the country.
TCAT Vice Chancellor James King said such partnerships are the next step in Tennessee colleges’ commitment to “lead the nation in career and technical education.” He also said both the Secretary of Labor and Bill Gates have contacted TCAT leaders wanting to know what Tennessee is doing differently in the field of technical education.
King recognized four TCATE students who won the national championship in diesel biofuel mechanics – David Birchfield, Paul Smith, Clark Arrowood and Ozzy Thompson.
State Representative Timothy Hill presented Blevins with a proclamation from the Tennessee Senate recognizing TCATE on its upcoming 50th anniversary next year and its recent expansion.
The ceremony was also the official grand opening of the 95,000-square-foot, $16 million addition which allows the school to consolidate the two Elizabethton classes into one location.

A corrections officer at the Carter County Detention Center has been fired after police say he was caught attempting to... read more