Donations pour in for local shelter 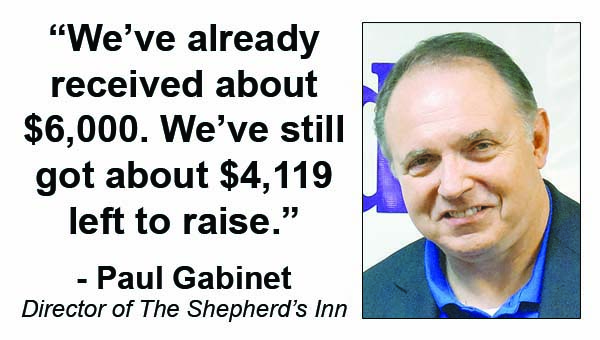 As the days tick off, a local domestic violence and temporary homeless shelter is working hard to bring in enough donations to keep their doors open in the face of a bank foreclosure.
Just over a week ago, The Shepherd’s Inn learned the bank was foreclosing on a loan taken out for the building which houses the shelter. At that time, Paul Gabinet, director of the shelter, made a public appeal to the community for help to save the shelter.
In order to stop foreclosure proceedings, Gabinet said the shelter must raise $10,000 to pay the bank before August 13 when the property is scheduled for public auction.
“We’ve already received about $6,000,” he said on Monday. “We’ve still got about $4,119 left to raise.”
Since news spread of the shelter’s financial difficulties, Gabinet said the community has come to the rescue.
“We’ve had a lot of good comments and support,” he said. “I’ve been real pleased with the comments and pledges we’ve received.”
The donations have come in despite the shelter’s lack of proper registration with the state to allow the acceptance of charitable contributions. According to the Tennessee Division of Charitable Solicitations and Gaming, a division of the Secretary of State’s Office, the shelter’s state registration to seek charitable contributions expired in June 2014 after the agency failed to file the necessary financial statements with the state.
Meanwhile, the shelter’s financial woes have compounded. The mortgage payment for the shelter is $982 per month and the agency was four months behind on the payments, Gabinet said. While the amount of the overdue payments was $3,928, the amount owed by the shelter increased to $10,000 when penalties and fees were added in, he said.
In addition to donations and fund raising events, The Shepherd’s Inn also gets $12,000 a year in funding from the City of Elizabethton. That money comes in quarterly installments of $3,000 Gabinet said.
The shelter received the first quarterly payment at the first of July and applied it to the amount owed on outstanding bills and debt, Gabinet said.
Because of the pending foreclosure, Gabinet said the shelter’s board of directors met to try to brainstorm ways to not only raise the money needed immediately to stop the foreclosure, but to find a way to make the shelter more financially stable in years to come.
Gabinet says the organization is now looking for community partners to pledge monthly gifts to keep the shelter going.
“We need 65 churches and other friends to commit a monthly gift of $100,” said Michael Hawkins, chairman of the shelter’s board of directors. That’s all it takes to pay the entire annual budget. Gifts of $100 per month from 65 donors will pay insurance, staff, utilities and house payments.”
When the shelter first took out the mortgage, the amount of the loan was about $170,000, Gabinet said.
“It’s right around $130,000 now,” he said. “We’ve been paying on it for about 15 years.”
According to the public notice of foreclosure, the loan was taken out nine years ago in April 2006. The notice does not give the amount of the starting loan.
The shelter’s loan has not been refinanced and remodeling completed at the shelter in recent years has been done through grants, donations and volunteer work, according to Gabinet.
Non-profit organizations in Tennessee are required to provide financial statements, including copies of federal tax returns, to the state. In the agency’s 2012 tax filing, the most recent year filed with the state, the shelter listed an indebtedness totalling $118,588.
In that same year’s tax filing, the agency reported having $21,209 in cash, savings and investments in reserve.
“We did have an emergency fund balance,” Gabinet said, adding money from the account was used to cover budget shortfalls. “We do have a little bit, but not enough to take care of this.”
When news of the pending foreclosure broke, the shelter also learned their mandated state registrations were no longer valid.
Organizations doing business in Tennessee are also required to register with the Division of Business Services, also under the Secretary of State’s purview, according to Adam Ghassemi, director of communications for the Office of Tennessee Secretary of State Tre Hargett. That regulation applies to for-profit and non-profit organizations alike, Ghassemi said.
The Shepherd’s Inn registered with the DBS in 1997 but their registration was dissolved in 2000 by the state after the shelter failed to file the required financial statements.
When the Elizabethton Star spoke with Gabinet regarding the state registrations on July 23, he said he was unaware of the registration issues, but he attributed the problems to a “clerical error.”
On Monday, Gabinet said the shelter’s attorney and accountants are working with the state to “sort everything out.” He also noted the shelter’s DBS registration was dissolved by the state before he took over as director.
Having an expired charitable solicitations registration has put the shelter in a precarious position as it seeks to raise money to pay the mortgage.
Under state law, in order to seek charitable donations a non-profit must be registered with the Division of Charitable Solicitations and Gaming. Seeking donations without that registration could result in the shelter being found in violation of the Tennessee Charitable Solicitations Act, Ghassemi said.
“There are civil penalties we could enact,” he said. According to the DCSG, the shelter could face a $5,000 fine for violating the act.
“Even though you are a 501(c)(3) federally, the state can come in and do that,” Gabinet said, acknowledging the shelter could face penalties for continuing to ask for donations while their registration is expired. “I think they will work with us, though, and get it straightened out.”