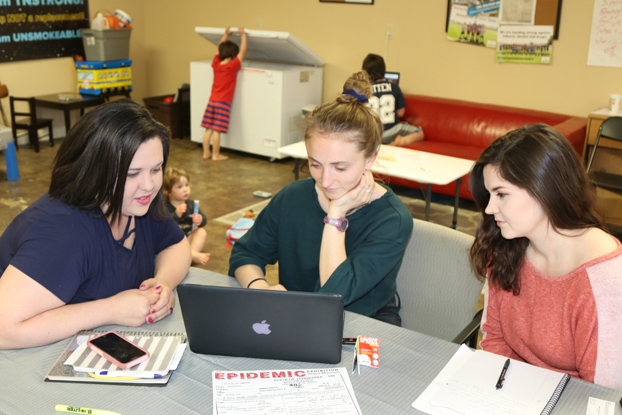 Star Photo/Amber Wadovick Jilian Reece (left) said she has partnered with East Tennessee State University students Rachel Hardin (center) and Shelby Drain (right) to come uop with the flyers and posters promoting the event as well as assisting in working on the camper itself.

Taking drug prevention and awareness to the streets

Jilian Reece has led the Carter County Drug Prevention to significant achievements over the years, but now she is taking their campaigns to the highway.

When she heard of the online program “Hidden in Plain Sight,” she said she knew she had to implement it with her own efforts.

“It was a really cool opportunity,” Reece said.

The online program is a scavenger hunt of sorts, in which players need to identify 33 signs of potential drug use in a virtual trailer or camper.

Reece said she passed Carter County Sheriff Dexter Lunceford and decided to ask him if he had an empty trailer she could acquire. She was in luck: they had one in the impound lot right then.

The following series of events was slightly complicated, as Reece said they had to get approval from the County Commission. The commission told them it could not be a donation, so she said Lunceford had to actually sell her the camper for $1.

From there, she got East Tennessee State University involved. Shelby Drain and Rachel Harbin, senior graphic design students at ETSU, said they have been working on the graphic design elements of the project for a few weeks.

“It has been a challenge figuring out the right terminology,” Harbin said. “We want to make it informational but also friendly.”

This life-size version of the online game will go under a new name: Make Room, a name Harbin said has a double meaning.

“We are literally creating a room, but we are also making room for conversation about this epidemic,” she said.

The project has another unique challenge to it, as well: attracting parents while keeping it engaging for the teenagers who come with them.

The Make Room project, according to Reece, is already booked for much of the summer, taking them across the Tri-Cities.

“We will be at both Back-to-School Bashes,” Reece said.

The trailer will debut at the Covered Bridge Festival, which will take place June 14 and 15.

In the meantime, a miniature model of the trailer is already on display at the Reece Museum at ETSU.

“It is cool for my youth board,” Reece said. “They got to pick the stuff that will end up in the camper.”

Currently, the unfinished camper is residing at the Northeast Community Credit Union at Highway 19E. Reece said the credit union has contributed a significant amount towards the project’s completion, but anyone interested can visit the trailer to make a donation at 1321 Highway 19E.

The Imagination Library is kicking off its annual Educators Hall of Fame for the 2019 year, bringing recognition and appreciation... read more