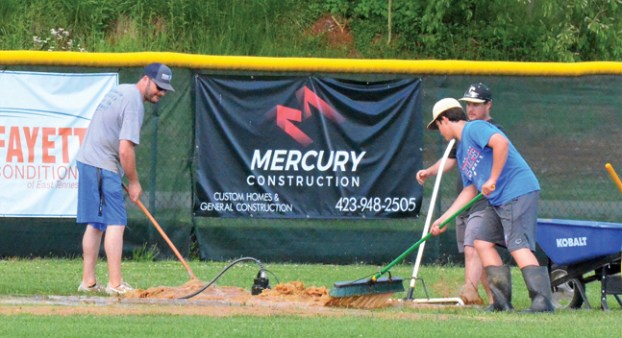 Star Photo/Ivan Sanders Hampton was scheduled to take on North Greene Friday in the District 1-A tournament being played at David Crockett at 2:30 pm. Due to a heavy rain storm that created a lake in center field, the game didn’t get started until after 7 pm and still had a couple of delays due to the weather. Crews worked hard to push the water off the field so the game could be played.

JONESBOROUGH— After rain delayed action in the District 1-A tournament on Thursday, the North Greene Huskies and Hampton Bulldogs rolled into Jonesborough early on Friday hoping to beat the rain.

They, unfortunately, were unsuccessful. The game which was scheduled for 2:30 pm didn’t get underway till a little after 7:15 pm despite grounds crews working extensively to try to mend the flooded field.

In a win-or-go-home situation, the nearly five-hour delay built even more anxiety.

The game got through three and two-thirds innings before a lightning delay meant another 45 minutes of waiting.

Ultimately the game finished 5-2 in favor of the Huskies.

Cayden Foulks kicked things off on the mound for North Greene. His first task was the lead-off hitter for the Bulldogs, Weston Street.

Street grounded out to third base and Foulks quickly retired the side in short order.

Hampton went with Joshua Owens to start the game on the hill. Owens started the game with a strikeout before walking centerfielder Kole Zirkle.

After a stolen base and sacrifice hit, Zirkle stood on third with two outs. Turner Bailey would step up next for the Huskies and slap a quick groundball right under shortstop Street’s glove with the error scoring a run.

Moving into the top of the second inning, Hampton still couldn’t get the bats going as all three batters were sat down making it six up and six down for Foulks on the mound.

The bottom of the second inning spelled trouble for the Bulldogs.

After hits from Chase Malone and Brayden Garber, an error on third baseman Caleb Royston meant another run for the Huskies.

After several infield hits and a couple of mistakes from the Bulldogs, three more runs crossed the plate before the inning ended and the score stood at 5-0 after two innings.

The fourth inning brought a wild series of events. Owens started the inning for the Bulldogs getting walked. He was followed by Morgan Lyons who singled into left field.

After an argument landed the Bulldogs’ third base coach in the dog house, the Huskies turned to Brayden Garber on the mound to close out the game.

Despite a promising start to the inning, Hampton would leave two runners stranded.

The bottom of the fourth inning meant another hour-long rain delay. When the game resumed, North Greene had the bases loaded with a chance to take control of the game.

However, the runner on third base got caught napping and was picked off to end the inning.

The fifth inning saw the Bulldogs finally get on the board with Caleb Oaks touching all four bases after North Greene committed two errors.

Hampton’s bats stayed hot in the sixth inning as Lyons hit a deep fly ball into left field. Lyons would score later in the inning but would be the only run of the inning.

The bottom of the sixth inning meant the fourth scoreless inning for North Greene as Owens continued a good game on the mound despite giving up five runs to this point.

The Bulldogs had one last chance in the seventh and battled to the final out but were retired on three straight strikeouts.

Hampton’s season came to an end with the loss.