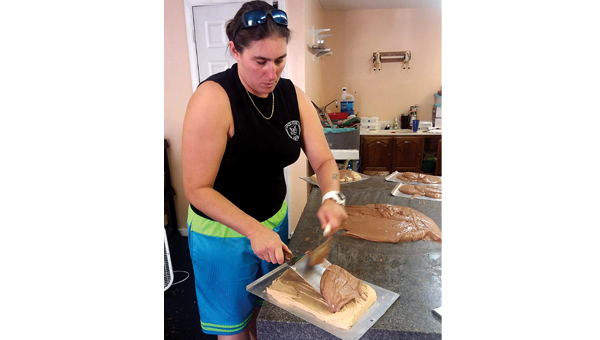 The making of fudge could be said to not be as enjoyable as eating it, yet despite this, one local woman has carried on a tradition of fudge making started many years ago by her grandfather.

Carter County native Alice Peters now makes fudge to sell at craft shows, through local shops and online. The brand is P.L.B. Fudge and Alice somehow finds time to make the yummy treat while also holding down a full-time job.

The history of P.L.B. Fudge begins in 1985 when Alice’s grandfather,  C.Y. Peters, hung up his hat as circulation manager for the Elizabethton Star where he had worked for 26 years and moved to Myrtle Beach where he began working at what was then known as the Fudge Pot.

C.Y. eventually teamed up with Richard Landcaster and bought the Fudge Pot from its Wisconsin based owner in 1986 and changed the name to P.L.B. Fudge. In 1989, Hurricane Hugo struck Myrtle Beach causing widespread damage and forcing him to take his fudge business on the road to sell at craft shows.

“When [his father] started making the fudge he carried flavors like chocolate, with pecans and black walnuts, maple, vanilla, and most people’s favorite, peanut butter. In the late ’90s he started testing other fudge flavors like pumpkin and dreamsicle,” Charles Peters said.

C.Y.’s son also commented on the ups and downs of working craft shows. “There were always good shows and bad shows and it took years to find the best shows, but the Peters family worked them all,” he said.

Now that C.Y.’s granddaughter has taken up the family business, she has added even more flavors such as butterfinger, butter pecan and apple cinnamon. Altogether, there are 15 flavors of P.L.B. Fudge to choose from.

Alice jokingly reveals how she became involved in the fudge making business.

“My grandmother would force me to go and sell fudge at festivals when I was nine years old,” Alice said. “I took it over completely in 2007, and I enjoy it because it is more than just selling candy; it is a social event and I get to travel and meet all kinds of people.”

Learning while exercising with PowerUp Fitness