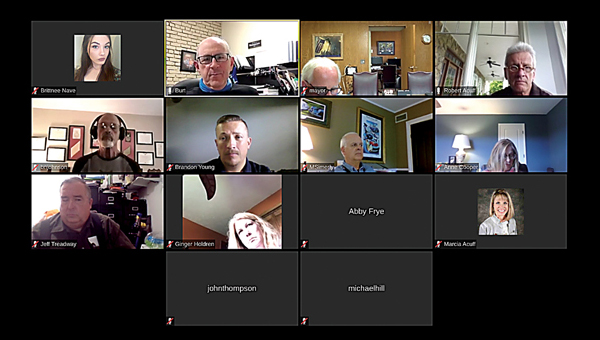 Conversations with Knoxville Area Based Ministries, KARM, happened via ZOOM Thursday night as Carter County leaders addressed homelessness.
The conversation comes after River’s Edge Dream Center, a church that also serves as a homeless shelter, announced the temporary suspension of overnight stays back in late January. Robert Acuff, a commissioner of the county, reached out to KARM to begin conversations in mid February.
During the virtual meeting, Burt Rosen, CEO and President of KARM, spoke on their work to help the homeless population. The faith-based organization was founded in 1960, and now offers programs that not only provide food and shelter to the homeless, but also look at ways to help get people back on their feet. In providing this background, Rosen also shared his own personal story with homelessness.
“I moved here to Knoxville really as the result of the oldest of my four children ending up homeless,” he said. “That really just turned my world upside down because I always had this picture in my head of who the homeless were. It was the stereotype picture, but just like in other areas of my life and perhaps in yours, once having my son drop out of college and become homeless, it was a real personal experience in my life. It changed how I looked at things.”
Rosen elaborated on the various programs involved in KARM, and how money is raised for the organization, which is not government funded. Money is raised by fundraising, operating thrift stores, donors, etc.
When the background behind KARM concluded, Carter County was brought into the mix, with it being stated that the area does not have a homeless shelter for men, but does have Recovery Soldiers. Questions and conversation went into funding, and a common consensus among attendees was that a faith-based organization would be the best route here as it is in Knoxville. Brandon Young, pastor of Harmony Free Will Baptist Church, noted the active roles churches would want to play in feeding and helping others in the community.
Rosen extended an invitation to Acuff and anyone else interested to visit his facility at a later date, and stated more conversation would continue moving forward.
After the meeting, Acuff said he thinks the conversation was a success, with many reaching out to him wanting to move forward.
“I was very pleased,” he said. “In fact I had a number of other people reach out afterwards, saying we’ve got to do this.”
Acuff also wants to take Rosen up on his invitation.
“I think we will take Burt up on his offer to come down and visit KARM, and just take anyone who wants to go,” he said. “I think coming out of this, we will have a taskforce that will talk together and get others involved.”
He concluded he is hopeful regarding this topic moving forward.
“I think going forward, this is the start of something that will be great for Carter County and for our homeless citizens.”
You Might Like

In honor of the graduates of 2020, we have reached out to Elizabethton and Carter County schools to share their... read more