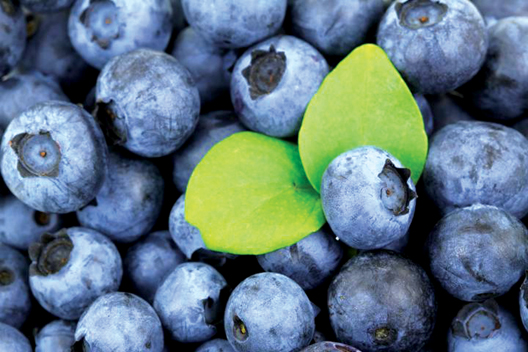 Blueberries are one of the easiest fruits to grow.

Did you know that the modern blueberry is a 20th-century invention? Before the 1900s, the only way to enjoy these North American natives was to find them in the wild. Then, scientists started to unlock the secrets of cultivating blueberries — and we’re glad they did! Here’s how to grow blueberries in your garden. Plump, juicy blueberries are now easy to grow in your backyard on bushes that are resistant to most pests and diseases, and can produce for up to 20 years. A relative of rhododendron and azalea, blueberry bushes aren’t just a great fruiting plant but also an attractive addition to your overall landscape, offering scarlet fall foliage and creamy-white, bell-shaped spring flowers. Read more about why you should grow blueberriesin your home garden (as if you needed an excuse).
Types of Blueberries
There are four types of blueberries: highbush, lowbush, hybrid half-high, and rabbit eye.
The most commonly planted blueberry is the highbush. Most blueberry breeding has focused on this species, so there are many varieties that range widely in cold hardiness and fruit season, size, and flavor. Read more about blueberry varieties below.

Bushes should be planted in early to mid-spring. If available, 1- to 3-year-old plants are a good choice. These can be bought in containers or bare-root. In either case, be sure to buy from a reputable nursery or website.

Choosing and Preparing a Planting Site

• Select a sunny, sheltered spot. While blueberries are tolerant of shade, better crops are obtained in the sun. At the same time, they should not be exposed to harsh, drying winds.
• Don’t plant blueberries too close to trees, as the trees will not only block out sunlight, but will also suck up any moisture in the soil.
• If planting multiple bushes, it’s best to plant them in a patch, rather than scattered throughout your garden. This will bolster berry production and quality.
• The blueberry is a shallow-rooted plant. Therefore, it requires a soil that holds moisture, but also drains well and doesn’t stay wet. Don’t plant blueberries in sites that have heavy, clayey soils that stay wet.
• Blueberries thrive in soil that is acidic. The soil pH should ideally be between 4.0 and 5.0; soil that isn’t acidic enough will stunt growth. Soil can be acidified by mixing a small amount of granulated sulfur into the soil several months before planting. Peat moss, as well as pine bark or needles, are also good additions that will help acidify your soil.
• Mix organic matter into the soil before you set your blueberry bushes. (See more about soil amendments and preparing soil for planting.)
How to Plant Blueberry Bushes
• Dig holes about 20 inches deep and 18 inches wide (or about twice as wide and twice as deep as the roots of the plant).
• Space bushes 4–5 feet apart in a row, with at least 8 feet between rows. Prepare a planting mixture of 2 parts loam and one part oak leaf mold, peat moss, aged sawdust, or compost, and place a layer of this mixture in the bottom of the hole.
• Set the bush in the hole with its roots spread out. Don’t plant the bush any deeper than it grew in the pot. Pack the hole tightly with soil.
• Apply fertilizer one month after planting, not at the time of planting. Apply ½ ounce of a 10-10-10 fertilizer in a band around the plant 6 to 12 inches from the crown.
Can you grow blueberries in a container?
Yes! In fact, blueberries grown in containers are easier to protect from birds and other critters, more disease resistant, easy to harvest, and easy to move if needed. Plus, if you live in an area without acidic soil, growing blueberries in containers allows you to tailor the soil pH specifically for them.
Here’s how to do it:
• Use a large container with drainage holes.
• Use a potting mix designed for acid-loving plants such as azaleas or rhododendrons, or mix sandy soil with peat moss and compost.
• Plant the bush in the container and water well.
• Add mulch on top of the soil to keep in moisture.
• Place the pot in a sunny spot.
• Keep soil moist.
• In northern regions, overwinter the blueberry container in a protected area or cover the container with straw or wrap it in burlap.
How to Care for Blueberry Bushes
• Mulch to keep shallow blueberry root systems moist, which is essential. Apply a 2- to 4-inch layer of woodchips, saw dust, or pine needles around the bush after planting, but leave a gap around the trunk of the bush to allow for proper air flow. Read more about mulching.
• Blueberries need 1 to 2 inches of water per
• Warning: Blueberries are a favorite snack of hungry birds, so it’s recommended that you protect blueberry bushes ahead of time by draping bird netting over your plants.
• One year after planting, apply 1 ounce of 10-10-10 fertilizer per bush in the spring at blooming time, and increase the rate by 1 ounce each year thereafter to a maximum of 8 ounces for
• Do not allow the bush to produce fruit for the first year or two after planting. This lets the plant use its energy to get well established in its new home instead.
• Pinch back any blossoms developing on newly set plants to allow the energy to go to growth.

How to Prune Blueberry Bushes

For the first 4 years or so after planting, there is no need to prune blueberry bushes. From then on, pruning is needed to stimulate growth of the new shoots that will bear fruit the following season.

• Prune plants in late winter or early spring before new growth begins.
• Cut out dead, broken, short, weak, and spindly shoots.
• On highbush varieties, begin with large cuts, removing wood that is more than 6 years old, drooping to the ground, or crowding the center of the bush. Also remove low-growing branches whose fruit will touch the ground, as well as spindly twigs.
• Prune lowbush blueberries by cutting all stems to ground level. Pruned plants will not bear the season following pruning, so prune a different half of a blueberry patch every two years (or a different third of a patch every three years).
How to Harvest Blueberries
Blueberries are typically ready for picking between June and August.
• Don’t rush to pick the berries as soon as they turn blue. Wait a couple days. When they are ready, they should fall off right into your hand.
• If you plant 2-year-old blueberry bushes, they should start to bear within a year or two. (Pick off any flowers that form the first year or two after planting, to allow the bush to become established.) Be aware that full production is only reached after about 6 years (depending on variety).
Blueberries are one of the easiest fruits to freeze. Learn how to properly freeze blueberries so you can have them all winter long.
You Might Like

Get ready to hear that eerie noise that can only come from a cicada. Experts say a massive amount of... read more