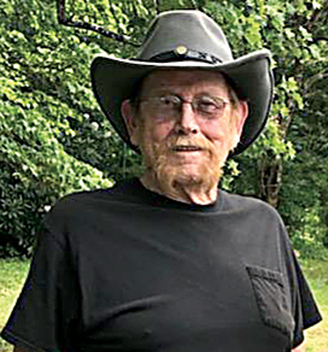 Ted “Teddy” Blevins, 72, of Greeneville, passed away Saturday, September 5, 2020, at Greeneville Community Hospital East.
Ted’s journey began on October 31, 1947 in Elizabethton, Tenn., but he stopped counting age years ago. He was done with God’s job and was called home. Everyone would know when he would show up; he’d always be in his black pocket t-shirt, carpenter blue jean shorts or jeans, and his cowboy hat. Dad was a dedicated father, first and foremost. He treasured his children and embraced every moment with them. He especially loved his role as “Papaw.” He had a humorous personality and always made people around him laugh. Dad enjoyed life and being outdoors. He loved camping, woodworking, kayaking, and being on the lake. He was an avid fisherman and is sitting on the banks with his dad today! But when weather was cool, his favorite thing to do was take his granddaughter to the shooting range. Teddy had various jobs over the years, and was excited to be retired. His favorite though was at the Marathon Stations and all the wonderful friends that he made! Thank you for being his friend! He graduated Class of ’65 from Unaka High School and had a big family.
He was preceded in death by his loving parents, Beryl and Clara Blevins, and brother, Richard Blevins.
Those left behind to cherish his memories are his two daughters, Kelly Blevins Ricker (Paula Douthat), and Kourtney Ann Blevins, both of Greeneville; brothers and sisters, Edna Grindstaff, Wilma Martin, Paulletta Pierce and her husband, Ken, Jackie Blevins, Samantha Berry and her husband, James, and Terry Blevins and his wife, Tammy; granddaughters, Emily Ricker and Traci Johnson and her fiancé, Tim Manis; great-grandsons, Devin Blagg, Cody Bowens Jr. and Colson “Eli” Bowens; and several special nieces and nephews.
In accordance with Teddy’s wishes, his body will be cremated and a Celebration of Life Service will be held at a later date. Thank you to everyone who considered Teddy a friend! The family only requests that, to honor Ted, make someone smile each day! In lieu of flowers, make a donation to your favorite charity. “Teddy Bear hugs to everyone.” Thoughts and memories may be shared with the family at www.jeffersmortuary.com
Jeffers Funeral and Cremation Service is in charge of arrangements.
You Might Like

Elizabeth Christine Ballard, 80, of Elizabethton, went home to be with the Lord and her family on Sunday, September 6,... read more