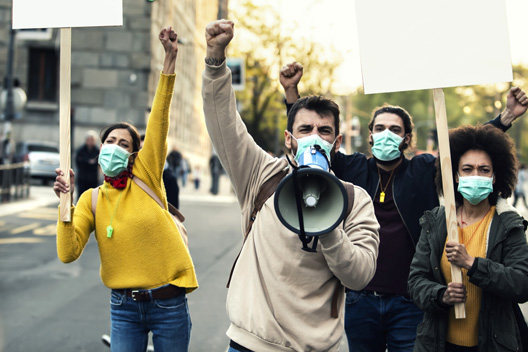 By VLADIMIR ISACHENKOV
Associated Press
MOSCOW (AP) — The embattled president of Kyrgyzstan ordered a nearly two-week state of emergency Friday in the capital in a bid to end the political turmoil that has been sparked by a disputed parliamentary election.
President Sooronbai Jeenbekov decreed that the state of emergency, which starts at 8 p.m. Friday and runs through 8 a.m. on Oct. 21, could include a curfew and travel restrictions. He also ordered the military to deploy troops to Bishkek, the capital, to enforce the measure.
It was unclear whether police and the military would comply with the order.
Jeenbekov has faced calls to step down from hundreds of protesters who stormed government buildings the night after Sunday’s parliamentary vote was reportedly swept by pro-government parties. The demonstrators also freed former President Almazbek Atambayev, who was sentenced to 11 years in prison in June on charges of corruption and abuse of office that he and his supporters described as a political vendetta by Jeenbekov.
The turmoil marks a third time in 15 years that protesters have moved to topple a government in Kyrgyztsan, a Central Asian nation of 6.5 million that is one of the poorest to emerge from the former Soviet Union.
Like in the uprisings that ousted Kyrgyz presidents in 2005 and 2010, the current protests have been driven by clan rivalries that play a key role in the country’s politics.
After an initial attempt to break up protesters immediately after the vote, police have pulled back and refrained from intervening with the demonstrations.
Under pressure from protesters, the Central Election Commission has overturned the parliamentary vote results and protest leaders have moved quickly to form a new government. An emergency parliament session on Tuesday named lawmaker Sadyr Zhaparov as a new prime minister, but the move was immediately contested by other protest groups, plunging the country into political chaos.
Atambayev spoke to demonstrators who flooded central Bishkek on Friday, urging them to refrain from violence.
“I’m against using force, everything should be done by peaceful means,” he said.
Soon after he spoke, supporters of Zhaparov assailed Atambayev’s supporters, hurling stones and bottles.
Jeenbekov has used infighting between his foes to dig in. He said Thursday he may consider stepping down, but only after the political situation stabilizes.
Kyrgyzstan is strategically located on the border with China and once was home to a U.S. air base used for refueling and logistics for the war in Afghanistan. The country is a member of Russia-dominated economic and security alliances, hosts a Russian air base and depends on Moscow’s economic support.
Russian President Vladimir Putin chaired Friday’s session of his Security Council to discuss the situation in Kyrgyzstan, among other issues.
“It was noted that it’s necessary to quickly stabilize the situation to prevent it from sliding into chaos,” Kremlin spokesman Dmitry Peskov said after the meeting.

Venezuelans once again fleeing on foot as troubles mount