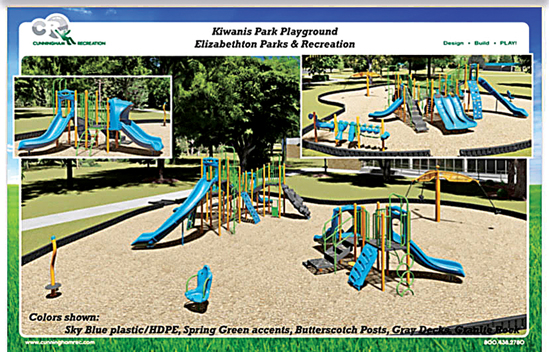 Contributed Photo A projected image of the new equipment once installed at Kiwanis Park.

Kiwanis Park in Elizabethton is getting a face lift with playground equipment.
It was announced in early September that the Richard Tetrick family had given a donation that provided the funding needed to purchase new playground equipment at the park. Now, installation is about to begin.
Mike Mains, Director of City of Elizabethton Parks and Recreation, said the installation will take about two weeks, and is excited for this new addition to the park.
“It’s really going to be something that the community can enjoy,” he said.
Mains said the equipment ultimately purchased includes two main pieces and other features surrounding them. These new additions will serve children of all ages.
“This is some of the best equipment you can purchase,” said Mains. “That is something we are proud of too. ”
Mains was grateful for the Richard Tetrick family donation.
According to Mains, this new equipment and improvement to the park is very important for the community.
“It’s a resource that kids can get out and enjoy in the outdoors,” he explained. “We live in such a beautiful location.”
The location of this park also plays a significant role. Mains explained that kids from the Boys and Girls Club as well as those from elementary schools play here. Additionally, there is a lot to do at this park, from the ball court to the pavilion to the playground.
He went on to explain that not only do these improvements help the park itself, but also Elizabethton as a whole.
“Anything we do to improve our recreational resources will benefit our community,” said Mains. “You don’t have to do a study on it; that’s a known fact. If you put money into your recreational facilities, it will pay off.”
Mains explained that outside sources see what we put back into our community, individuals like businesses. He explained that this is ultimately an investment that will enrich both the park and community.
Mains said he is excited to see the finished result of the installation.
“It’s going to be so great to see this equipment go in there. We’ve made substantial improvements, and it’s really going to be enjoyed,” he said.

Keeping track of the election… The STAR is your source for local, national elections

After months of campaign ads, debates at the local and national level, and door-to-door campaigning the day has finally arrived... read more