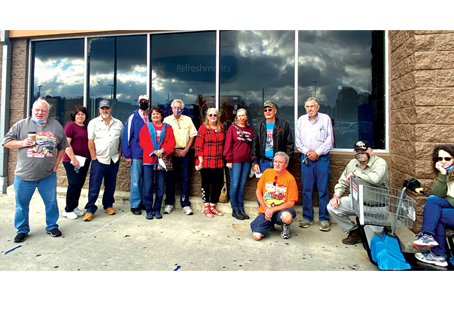 Members of the Carter County Car Club went shopping at Walmart on Friday morning.
This shopping excursion took place bright and early to help support children in need.
Last year the club helped a whopping 105 angels from the Salvation Army Angel Tree. According to Eddie Brumitt, president of the club, this number was surpassed this year as the club served 126 angels.
“Last year we were told we supplied 25 percent of the need in Carter County for the Angel Tree Program,” he said. “We were also the second-largest donor in the Tri-Cities last year. This year, we are hoping to be the largest donor.”
During the shopping trip on Friday, members armed with shopping carts and masks took to the aisles. This year a coat, shoes, and three toys were on the list. The Salvation Army covered clothing. Angels ranged from infants to teenagers.
“Unfortunately, there’s a lot of families that don’t have the funding to celebrate Christmas and take care of the child,” said Brumitt. “All this does is help that child have a happy Christmas.”
Since 1982, the car club has donated to children’s charities throughout the area.
This year, the club is donating $20,000 to be spread out amongst the following children’s charities: Salvation Army Angel Tree Program, Elizabethton Boys & Girls Club, Dolly Parton Imagination Library, Carter County Schools Accelerated Reader Program, Children’s Evangelism Fellowship Program, Friends Down Syndrome Program and Isaiah 117 House.
According to Brumitt, in spite of the pandemic, this has been a year of giving.
“We were very blessed this year,” he said. “We raised more money, despite COVID, and despite missing 8 or 9 cruise-ins this year because of COVID. We still raised more money than last year.”
Brumitt said the increase in donations shows the level of giving this year.
Donations typically are taken up once the cruise-ins begin in downtown, which generally occurs between the months of April and October.
Despite donating since 1982, Brumitt said not a lot of people know what this club does.
“It’s amazing how many people don’t know what the club does,” said Brumitt. “They think it’s just a bunch of old men who show their cars off. That’s not it. We do it for this right here, helping the kids.”

Carter County Schools announced their decision to extend remote learning on Thursday.  Remote learning will continue through the week of... read more