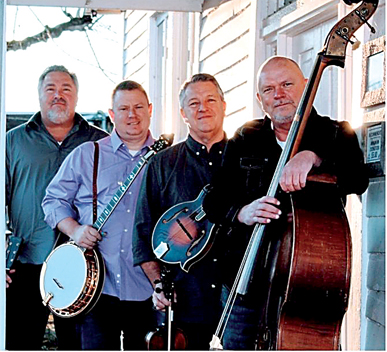 The Trinity Valley Travelers, formerly High-Test Grass, a bluegrass band steeped in the musical traditions of Southwest Virginia and the surrounding areas of Middle Appalachia, will perform Saturday at the Covered Bridge Jams as part the Elizabethton Parks and Recreation Summer Concert Series.
The group’s repertoire consists of hard-driving bluegrass music mixed with lonesome ballads and traditional bluegrass gospel songs.
The band consists of Eric McMurray from Gate City, Va., on lead and harmony vocals, mandolin, and fiddle; Kris Rasnake of Lebanon, Va., on bass, vocals and banjo; Garnet Lester out of Glade Spring, Va., on lead and harmony vocals and rhythm guitar; Eric Blankenship by way of Coeburn, Va., on harmony vocals and upright bass; and Carter Lester hailing from Glade Spring, Va., on lead guitar.
Eric McMurray is a multi-instrumentalist who has been playing for 46 years. He has won multiple contests on banjo, guitar, mandolin, and fiddle. Eric has been a member of the ETSU Bluegrass Pride Band, Scott County Boys, Moccasin Gap Bluegrass Band, Turkey Creek, Tennessee Skyline, and he was a founding member of High-Test Grass. Notably, Eric also spent time playing in the Nashville area with Spencer’s Mill as well as 12th Avenue South which was the Tuesday night house band at The Station Inn in the late 1980s.
Kris Rasnake started learning the banjo from his father, Randy, at the age of 9. Since then, he has been one of Larry Sparks’ Lonesome Ramblers, a part of Ernie Thacker and Rt. 23, a member of Blue Moon Rising, and he has filled engagements with Ralph Stanley as one of the Clinch Mountain Boys.
Garnet Lester has been in the SWVA/East Tennessee bluegrass scene for the better part of 30 years. He learned guitar from his grandfather as a child. He is a former member of The Chip Ridge Boys, The Sounds of Gospel Grass, Fescue, Bluegrass Expedition, and most recently was a part of High-Test Grass.
Eric Blankenship is also multi-instrumentalist who has been playing music for 15 years. He learned to play guitar when he was 8 years old, then the bass, mandolin, banjo, and piano were to follow. His love for music originated playing along with family members in church. In 2016 he played bass for the Possum Holler Boys. Trinity Valley Travelers is his first formal band.
Carter Lester is proficient on multiple instruments as well. He plays rhythm and lead guitar, banjo, and bass.  Carter is currently a freshman at Patrick Henry High School in Glade Spring, Va. He has been a full-time member of Valley Grass and a part-time member of High-Test Grass for the past two years.
Elizabethton Parks and Recreation is proud to present this free concert series along with sponsors: Carter County Bank, Elizabethton Star, WBEJ Radio, Elizabethton Federal, Carter County Parks and Recreation, Elizabethton/Carter County Chamber of Commerce and Carter County Tourism.
“Come on down to Covered Bridge Park Saturday at 7 p.m. Bring your lawn chair and a friend. Leave your worries behind, sit back and enjoy a wonderful free concert while relaxing in Historic Covered Bridge Park,” said David Nanney.
For more information you may contact the Elizabethton Parks and Recreation at 423-547-6441.