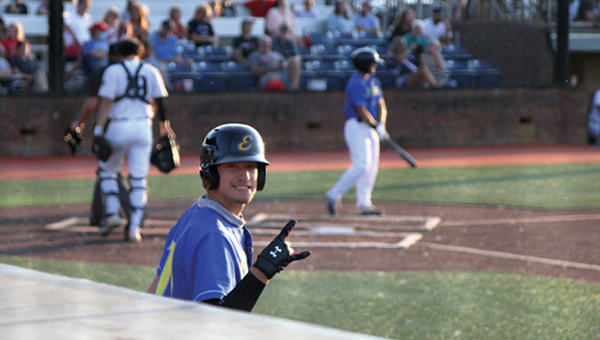 Star Photo/Nic Miller Michael Robinson, a product of Elizabethton High School, poses for the camera before an at-bat with the Elizabethton River Riders Thursday night.

When Michael Robinson graduated from Elizabethton High School in 2017, he would take his baseball talents to Walters State Community College where he would help lead the Senators to a third-place finish in the 2019 Juco World Series, finishing the season with a 54-11 record.

Not long after, Robinson would transfer schools and begin to play on the diamond for one of the nation’s top programs in the form of the South Carolina Gamecocks, where he will continue to play this upcoming season.

However this summer, Robinson recently made the trip back to his hometown of Elizabethton to play for the Appalachian League’s River Riders after some players opted out of the remaining two weeks of the season.

This opportunity to finish out the remainder of the season with the River Riders not only gave Robinson a chance to get some work in but also allowed him to reconnect with old friends who are also showcasing their talents in the Appy League, such as Elizabethton outfielder Logan Estep or Johnson City Doughboys pitcher Lawson Wagner.

When asked about why he made the decision to come back to Elizabethton and play for the River Riders, Robinson shared a sentimental explanation, saying, “This team plays at the field I used to play on back in high school, and it’s really special for me to be able to go back there and play somewhere I made a ton of memories at.”

Joining a team towards the end of a season, it can be tough to quickly build chemistry with new teammates. However, this was not the case with Robinson, saying, “Baseball is baseball, and if you know one guy then you know them all. I already knew a few of the guys so it really helped with building chemistry with the players I just met a few days ago.

“Being on the field really helps a lot because you have to communicate with the rest of the infield and even the guys in the outfield. That really helped me build chemistry with our third basemen Reagan (Guthrie), our first baseman Gus (Fraley), and even Marcus (Brown) who just left yesterday.”

When asked about the atmosphere of the Appy League and playing in the area he grew up, Robinson said, “The people that come to these games are awesome. It’s such a great experience to be able to play the game I love in front of all these people that I know.”

With the Appalachian League season drawing to a close, fans can have the opportunity to watch local players such as Robinson, Estep, or Wagner in their final games.

East Side Elementary prepares for the 2021-2022 school year

BY NIC MILLER STAR STAFF nic.miller@elizabethton.com   After a very tough year for school systems around our area due to the... read more