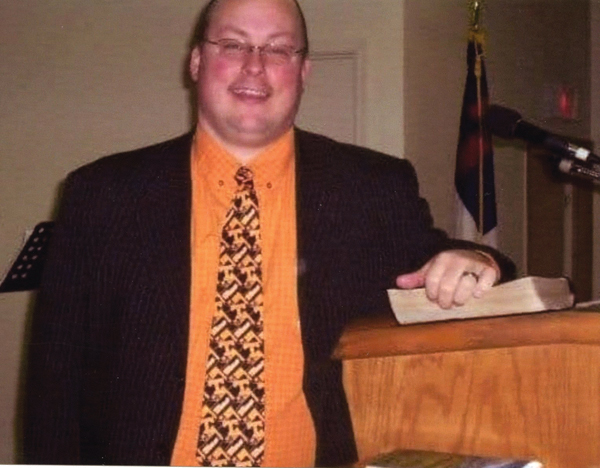 Philippians 4-13: “I can do all things through Christ which strengtheneth me.”
Rev. James Kevin Lewis, 50, Johnson City, went to be with his Lord on Wednesday, August 25, 2021, at Johnson City Medical Center. He was born July 29, 1971 in Kingsport, Tenn.
Kevin was a graduate of Johnson County High School. He was a Minister in the Free Will Baptist Church. He had served churches in Tennessee, Arkansas, Kentucky and Oklahoma. His home church was Grace Free Will Baptist Church, Johnson City.
Kevin’s hobbies were gardening, cooking, watching football and going camping with his dog Ollie.
He was preceded in death by his father, James Lewis.
Survivors include his wife of 32 years, Buffy King Lewis; a daughter and son-in-law, Emily and Daniel Oliver, Johnson City; his mother, Sandra Royston Lewis, Johnson City; one sister, Jenny Lewis, Johnson City; two brothers, Michael Lewis and wife Dereth, Knoxville, and Buddy Lewis and wife Ashley, Gray; several nieces and nephews; and his sister-in-law and brother-in-law, Missy and Mike Phillips, and daughter Kassie.
A memorial service to celebrate the life of Rev. Kevin Lewis will be conducted at 7 p.m. Monday, August 30, at Grace Free Will Baptist Church, Johnson City, with the Rev. Curtis Hurt and the Rev. Rex Johnson officiating. Music will be provided by The Hood Family. The family would like to express a special “Thank You” to all the churches that have prayed and supported the family during his illness. Also to the doctors and staff of DaVita Tennessee Valley Dialysis Center. The family will receive friends from 6 to 7 p.m. Monday at Grace Free Will Baptist Church. In lieu of flowers, memorials may be made in memory of Kevin to the Kevin Lewis Fund % Northeast Community Credit Union, 980 Jason Witten Way, Elizabethton, TN 37643. Condolences may be sent to the family at our website, www.memorialfcelizabethton.com.
Memorial Funeral Chapel is serving the Lewis family.