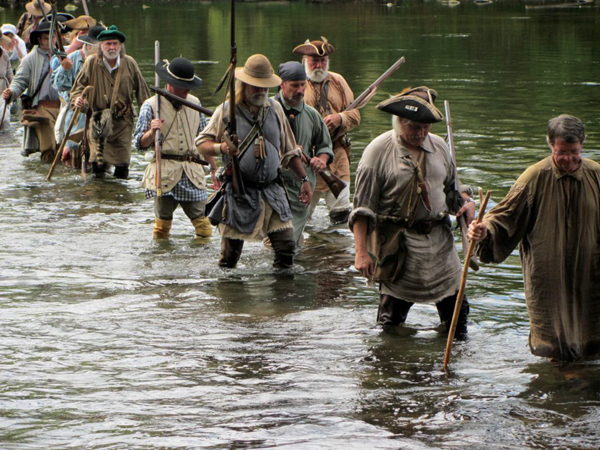 The Gathering at Sycamore Shoals, scheduled Saturday, Sept. 11, at Sycamore Shoals State Historic Area will set the stage for the annual Overmountain Muster Sept. 25 and 26 at the park. The gathering will be held at 10 a.m. and will be celebrated with a memorial service and a ceremonial wreath gathering.
The event is sponsored by the Tennessee Society Sons of the American Revolution.
In conjunction with the annual muster event, members of the Overmountain Victory Trail Association will recreate the historic march to King’s Mountain with the crossing of Watauga River on Saturday, Sept. 25, at 2 p.m. just as the Overmountain Militia did 241 years ago.
Later that evening the Lanterns & Legends of 1780 will be celebrated with Overmountain Militia Muster Candlelight Tours, beginning at 7 p.m., and continuing every 15 minutes until 8:30 p.m.
Admission is $9 for adults and $5 for youth 17 and under. Pre-registration is required
The year is 1780 and America’s War for Independent is in its fifth year. British Major Patrick Ferguson has threatened to destroy the frontier settlements. In response, the Overmountain Men have gathered at Sycamore Shoals and are forming a frontier army to search out Ferguson and his loyalists. The candlelight tours will feature the sights, sounds, and emotions of the 18th century as participants are guided through the encampments by candlelight. Participants will meet such legendary figures as Col. John Sevier, Mary Patton, Rev. Samuel Doak and others as they share their dramatic story of this historic gathering which led to one of the most decisive victories of the Revolutionary War. Each tour lasts approximately one hour and begins in the Visitors Center.
The Overmountain Muster will be held the weekend of Sept. 25-26 from 10 a.m. to 4 p.m. Saturday and 10 a.m. to 3 p.m. Sunday. The weekend will feature living history demonstrations at the encampment of the Overmountain Militia before the Battle of Kings Mountain in 1780.
Other September events include:
– 24th Annual Watauga Knap-In Sept. 11 & 12 from 10 a.m. to 4 p.m. in celebration of Tennessee Archaeology Week. Watch primitive skills craftsmen make arrowheads, spear points, and other survival tools.
– Tunes of the Time Sept. 15 at 2 p.m. Admission is $5. Join Museum Curator Chad Bogart in the Gathering Place of the park’s Visitors Center for a glimpse into the musical heritage of the colonial frontier.
– Fellowship English Country Dancing Sept. 19 from 1:30 to 4 p.m. Beginners and seasoned dancers are welcome. Sponsored by the Sabine Hill Society, the session will provide an opportunity to learn different dances.
– Full Moon Hike Sept. 20 beginning at 9 p.m. Admission is $5.
– Night Fishing With A Ranger Sept. 21, beginning at 8 p.m. Cost is $5. Fishing license with trout stamp required. Bait, tackle or poles not included.
– Old-time Music Jam led by Art Lang Sept. 26 from 1:30 to 4 p.m. Old-time musicians of all levels are welcome.
For more information, call the park at 543-5808.