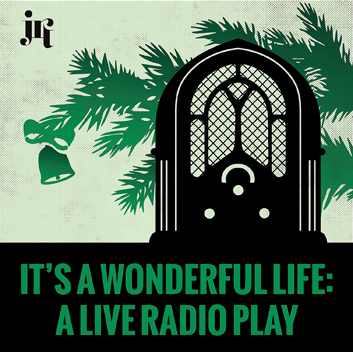 Running for just one weekend at the Jonesborough Repertory Theatre is a unique presentation of the classic story, “It’s a Wonderful Life.” Tap into your imagination as you hear the story unfold as if sitting around a radio in the 1940s.
“In 1946, radio was still king,” said the show’s director, Tom Flagg. “Television hadn’t quite taken over. People listened to the radio, and they used their imagination. They got enveloped in the story, because it was all about the story. And to enhance the story, they had great voices. So, when people auditioned for this show, I had them stand behind a screen so I couldn’t see them. It was just about the voice.”

This show takes the audience back 75 years to a 1940s radio studio. The seven actors will bring to life 23 different characters. It’s the epitome of storytelling. And is there a better place to see storytelling come to life than in the Storytelling Capital of the World?

“When we moved to Jonesborough, we went to the Storytelling Festival,” Flagg remembered, “and we were in a tent with 1000 people to watch somebody talk. But he was so scintillating and the character he created was so real, you kind of forgot you were just watching a guy talk. That’s what we’ll create; the actors will paint a picture of their character, and of their story.”

Because in a radio play you can’t show what’s happening, a lot more exposition is necessary to tell it, to render a picture of what’s happening. What you’ll hear in the radio show is what you would see in the film.

“I would ask the audience that just for a minute,” Flagg said, “to close your eyes and think about what you’re hearing and then imagine, because you won’t be able to see the bridge where George is threatening to jump off. You won’t see that big old ramshackle house that George and Mary restore. You won’t see Bailey Park where all those nice little houses were built. You won’t be able to see all that; you’ll need to imagine it.”

There’s also the nostalgia and “good feelings” of being a family back in the olden days, sitting around a radio listening to the broadcasts.

“It’s a Wonderful Life: A Live Radio Play” is written by Joe Landry, directed by Tom Flagg (a former Broadway actor), and stage managed by Audrey Holley. Cast members are Becky Edmisten, Paul Fagan, Janette Gaines, John Guerrasio, Mika Hoilman, Caleb Knisley, Emma Montag, Jonathan Schmidt, and Joel VanEaton. The show is sponsored by Denny Dentistry and Sonia King. Shows run Thursday through Sunday, November 4-7. Tickets are $17 general admission, $15 for students and seniors. There is also a special group rate for parties of 15 or more. To purchase tickets, call the Historic Jonesborough Visitors Center at 423-753-1010 or go online to jonesboroughtheatre.com. The theatre is located at 125.5 W. Main St., Jonesborough. From the Town of Jonesborough: In accordance with current CDC guidance, masks are kindly requested for all patrons attending our performances.