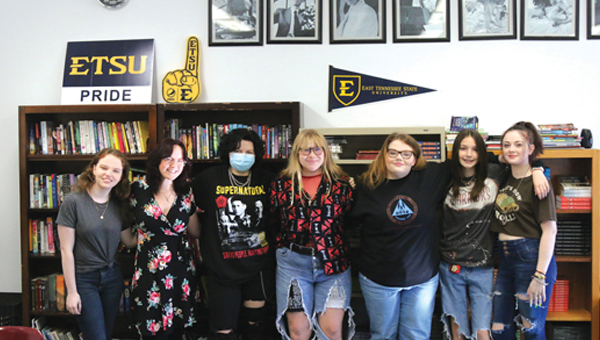 Whether they describe themselves as opinionated or as simply enjoying the opportunity to perform, the students who make up Happy Valley High School’s new speech and debate club are finding success.

“I am a very opinionated person, and a healthy outlet for that is the speech and debate club. When Mr. Wilson said there was a part of the club that focused on the arguing aspect, I became super excited to join,” said senior Gracee Wolf.

Matt Wilson, freshman English teacher and coach of the speech and debate club, said the inaugural group of students is excelling. The club has competed in three competitions so far and will participate in a total of eight before Christmas. The team finished in fifth place at their most recent competition at the Austin East Invitational.

“To me, the most important thing is seeing these kids create their own pieces and show who they are as people as well as what interests them,” Wilson said.

“We have never really had anything like this before so it is awesome to be a part of the first group here at Happy Valley,” said Andrew Hensley.

The club is part of the National Speech and Debate Association. “This program has cast a wide net for kids that like to debate or have interest in becoming a lawyer because of all the preparation that goes into it,” Wilson said. “You have to prepare a case, have a prepared statement and argue that statement, which is the debate aspect.”

In the speech categories, students can compete in drama interpretation or humorous interpretation for those that are naturally funny people. “There is a lot of room for kids to find their voice and participate in something that is going to help them become a better communicator,” Wilson said.

“Because I want to be a theatre major, this gives me a chance to perform in front of a lot of people and discover new ways of performing.,” said Autumn Earp, a senior and aspiring theater major. “It is very enjoyable and I have a very fun time doing this.”