The Carter County Commission on Tuesday approved redistricting of the eight districts but rejected three proposals to reduce the size of the commission.

“The citizens lost tonight,” said Randell Jenkins, who serves as chairman of the Rules and Bylaws Committee and spearheaded the workshops to redistrict and review the size of the commission.

“I want the people of the sixth district and all the other districts to know that I fought for them. I fought for what they asked me to do. It’s clear to me now that the only way this commission will ever downsize is to take the decision out of the commission’s hands and let the people vote.”

The resolution to keep the commission size was passed 13-9, with one absence and one abstention.

In addition to redrawing district lines based on results from the most recent U.S. Census, Jenkins’ committee had proposed a plan to reduce the number of commissioners from three to two in each district. However, that proposal met objections from other members of the commission.

“How much are we saving doing this? What are we gaining – just to streamline? Or what is the real goal in cutting?” asked sixth district commissioner Gary Bailey. “I have to ask that question … I have people that have told me not to (reduce the number of commissioners).”

Mark Tester, who represents the third district, said he opposed downsizing for four reasons: eliminating one-third of the positions would shift extra work to the remaining 16 commissions; concerns about representation, citing the variances in size between larger precincts such as Keenburg and Central and smaller precincts, such as Watauga; filling of vacancies could take three to four months, during which a single commissioner would have to carry the full load; and the distance the two commissioners would have to travel to represent their district.

Travis Hill, another sixth district commissioner, questioned why members would oppose the reduction in size and challenged them to consider if they should be serving on the commission. “I think if you are opposed to not having the three commissioners you are concerned about your position the next election which means you are the third-place finisher,” Hill said. “If you do vote down to two, you know the workload – don’t pick up your papers and get on the ballot. If you are not going to work and serve like the rest of us, don’t pick them up.”

Willie Campbell, who represents the first district, said his constituents have been vocal in their opposition to reducing the size of the commission.

After three different resolution votes, the commission passed the redistricting map and to keep 24 commissioners but not before several commissioners voiced their support or concern for downsizing. “From one o’clock today until now, that machine (answering machine) is still going,” Campbell said, adding the message is “do not downsize that commission. ”

“They don’t want it downsized. This workload they are talking about, you are not going to be able to take it. A lot of us have jobs during the day and it gets dark on us and we can’t go out and check on things that we need to.”

Dr. Robert Acuff, another first district commissioner, said the responses he had received were different from Campbell’s with a large percentage of phone calls and emails supporting the downsizing.

Nancy Brown, who represents District 2, said the vote she was casting was for her constituents and not her personal vote.

District three commissioner Charles Von Cannon was one of the last commissioners to speak before the vote and shared with the commissioners about his weekend attendance at a Cattlemen’s Association meeting, where he spoke with people about the proposal to downsize.

‘I had one that said I am not for downsizing the commission,” Von Cannon said. “I had right at 90 say they wanted it downsized. These are the people that we represent as individuals. They don’t understand the committee system and you wouldn’t be able to explain it to them anyway because of its complexity. What’s the answer? I think 16 is the answer.” 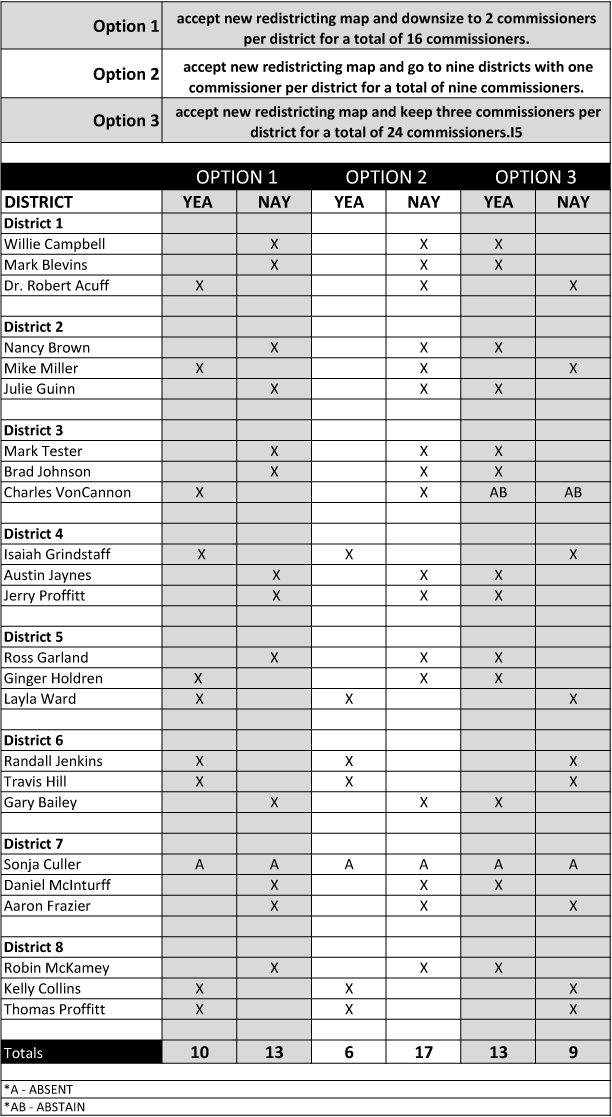