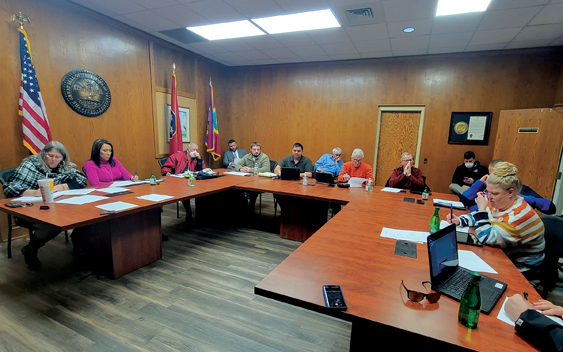 Star Photo/Ivan Sanders The Carter County Building and Grounds Committee met for their January meeting Tuesday inside the Mayor's Conference Room at the Carter County Courthouse.

Members of the Carter County Building and Grounds Committee will tour the old jail this week to review concerns about its condition.

Chairman Daniel McInturff proposed the tour on Monday during the committee’s meeting, saying he is concerned about conditions in the building.

“I have scheduled a tour of the old portion of the jail so this committee can look at some things that are going on,” said McInturff. “The section of the jail that has been shut off is in bad shape and smells so bad that you can’t stay in there very long.

“It has black mold and if we don’t do something, there will eventually be a lawsuit and we would lose.”

McInturff scheduled a tour with the committee at 3:30 p.m. on Thursday.

Mayor Patty Woodby updated the committee on the following:
– The Sluder Property has been worked on to address concerns by neighbors including underpinning, drainage issues, and new locks on the doors. Further work will be conducted in the Spring.
– The ADA transition plan has been completed as all county-owned properties now have floor plans.
– The restroom project at the courthouse is almost half finished as the bottom floor should be completed by next week and then the crew will be moving to the second floor. Completion should be in March 2022.
– Live stream equipment is currently being installed and should be completed by week’s end. Training will be scheduled for County Clerk personnel who will be operating the live stream within the next two weeks. Woodby said meeting should be available beginning the first of February.
– The first responder radio system is currently out for bid.
– A RFP is currently being worked on for the repair of gutters on the courthouse with addition of windows. This project will not begin before spring 2022.
– Asbestos testing is being conducted this week on the former planning and probation buildings. Once the results are back, an RFP will be put out for the demolition of the buildings and a new parking lot will be located on the site. Also, cameras are being installed at the new planning office focusing on the parking lot and the building.
– Woodby advised that she should know in February if the CTE site will be placed on Governor Bill Lee’s budget. If not, the state legislature will take up the budgeting issue. She further added that the county will be funding some of the work to keep the project moving along and on schedule with the Chemistry lab and welding bays set to open in the fall.

The next meeting of the Building and Grounds Committee will be at 6 p.m. on Tuesday, Feb. 1.