Tennessee General Assembly gavels in for 2022 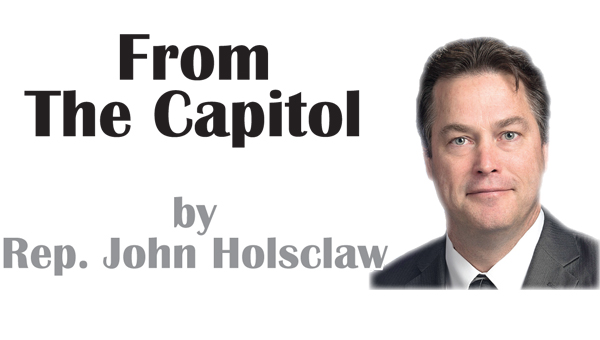 BY REP. JOHN HOLSCLAW
The 112th General Assembly reconvened this week in Nashville for its second session as Republicans focus on a range of priorities that puts families first, improves education and public safety, strengthens the economy, promotes fiscal responsibility and limited government.
The 112th General Assembly adjourned a successful first session on May 5 following passage of a debt-free $42.6 billion balanced budget. The Volunteer State is experiencing tremendous success and prosperity under conservative leadership and House Republicans will continue to build on that momentum in 2022.
A top priority this session will be to pass a spending plan that addresses the needs of all Tennesseans. House Republicans will continue to make strategic investments that build on conservative priorities and strengthen Tennessee’s standing as the most fiscally responsible state in the nation.
Republicans have a range of issues they will prioritize in the coming weeks. Improving education and addressing how Tennessee funds public schools will be front and center. Other key priorities this session include, truth in sentencing, enhancing mental health supports and juvenile justice interventions.
Redistricting plan begins to move through committees
The 2022 session kicked off this week with consideration of new state legislative boundaries. Redistricting is the process by which new district maps are drawn to reflect population changes based on U.S. Census data recorded every 10 years. Though the coronavirus pandemic delayed the federal government’s delivery of the 2020 census data, the first-ever bipartisan Select Committee on Redistricting for the House worked expeditiously to formulate a fair, transparent and constitutional plan. Despite a compressed timeline, the committee held meetings with members of the public from across the state to ensure the final concept complied with all state and federal requirements in the Voters Rights Act and was reflective of Tennessee’s growth.
Key Redistricting Plan highlights:
• U.S. growth was 7.4 percent
• Tennessee’s population grew 8.9 percent, growing from 6,346,105 in 2010 to 6,910,840 in 2020.
• Ideal district size increased from 64,102 to 69,806
• 17 counties grew by more than 10 percent. Middle Tennessee had the highest growth
• 30 counties experienced negative growth compared to only eight in 2010 –Rural west Tennessee, the Upper Cumberland region, and Northeast Tennessee had the lowest growth
• This caused a three-seat shift in representation to Middle Tennessee from other parts of the state
• There are 30 split counties – Nine in West Tennessee, Nine in Middle Tennessee, and 12 in East Tennessee
• Seven districts have paired incumbents and eight are without incumbents.
• This concept maintains the current number of majority/minority districts – Six districts remain unchanged
House Bill 1035 was approved this week by Select Committee on Redistricting and Public Service Subcommittee. It will be heard in the House State Government Committee on Jan. 18. The proposal must make its way through several committees before being heard in the House chamber for a final vote.
Legislation increases penalties for reckless driving
Republicans this week introduced legislation aimed to make roadways and neighborhoods safer by strengthening the punishment for reckless driving in Tennessee. House Bill 1661 would make aggravated reckless driving a Class A misdemeanor punishable by up to 11 months and 29 days in jail along with fines of up to $5,000. The lesser charge of reckless driving would remain a Class B misdemeanor.
Aggravated reckless driving would be defined as anyone who drives recklessly while knowingly impeding traffic in public places such as highways, parking lots and residential areas.
Republicans strengthen protections for police and service animals
Legislation known as Joker’s Law was introduced this week that would strengthen the penalty for anyone who harms a law enforcement or service animal in Tennessee. House Bill 1646 increases the penalty for anyone who knowingly and unlawfully kills a police dog, fire dog, search and rescue dog, service animal or police horse. They would now be charged with a Class B felony. Anyone between the ages of 14 and 17 who kills or causes serious injury to one of those animals could also be tried as an adult. Under present law, killing a law enforcement service animal is a minimum Class E felony. The bill is named in honor of Joker, a K-9 with the Bradley County Sheriff’s Office who was seriously injured after being shot during a pursuit last year.
Education Savings Account eligibility gives families more options during pandemic
House Bill 1671 would increase school choice options for Tennessee families by expanding education savings account (ESA) eligibility during the COVID-19 pandemic. A student would qualify for an ESA if their district did not offer at least 180 days of in-person learning during a school year during the pandemic, according to the legislation. Eligibility would also extend to districts that imposed a mask mandate and refused to exempt students who had written notification from their parent or guardian. The bill would not cover students in districts where a mask mandate was issued in response to an executive, court, public health department or other legally-binding order.
TN Dept. of Education releases draft of new funding framework
The Tennessee Department of Education released a draft overview of a potential student-based funding formula that would re-envision Tennessee’s Basic Education Plan, or BEP. The draft plan is based on feedback from thousands of Tennesseans through the department’s 18 subcommittees, town halls and public comment submission.
(Rep. Holsclaw represents parts of Carter County and Unicoi County in the Tennessee Legislature)

Dr. King remained hopeful. So can we