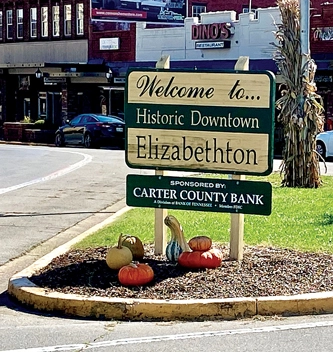 The City of Elizabethton’s Street and Sanitation Department recently began renovations to the sidewalks of Historic Downtown Elizabethton, using an outside contractor to refresh the feel of the historic district.

“We are using Master Services, a contracting group who specializes in foundation repair across the region,” Danny Hilbert, department manager, told the city council earlier this month. “They sent a representative out and gave us an estimate on how much it would cost for us to complete repair on all of the downtown sidewalks and reduce the trip hazards.

“Instead of going downtown and taking a backhoe, an air compressor, and concrete saw to cut all of those big slabs of concrete out, a project that would take us days to complete, these contractors have a much simpler solution. They drill holes in the slabs of concrete and insert foam into them, causing the sidewalks to rise up,” Hilbert said.

In a historic area such as Downtown Elizabethton, materials used when the sidewalks were first built are much different than they are now, something that Hilbert said made things slightly more challenging.

“Some pieces of the concrete are harder to repair than others,” Hilbert said. “Back when those sidewalks were put in during the 1970’s, they tied pieces of rebar into the slabs of concrete. That’s back when sidewalks were really built.”

Hilbert stated that Master Services had finished the 400 block of the downtown area a week before last Thursday’s meeting.

“We have to talk with the City Manger, but we hope to proceed with this project through the entirety of downtown. We are also in contact with another company who has surveyed the sidewalks and will be able to help us fill in the cracks along downtown,” Hilbert said.

Hilbert said proceeding with this project would save the City of Elizabethton thousands of dollars due to using an outside source and not city equipment.