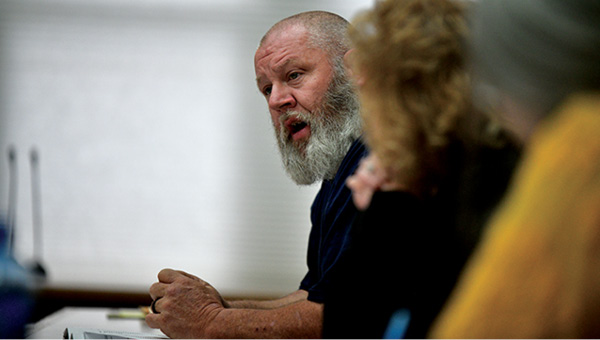 File Photo/Ivan Sanders Sanitation and Landfill Director Benny Lyons faces another obstacle as an engine on the landfill compactor has gone bad and will have to wait seven to 14 weeks to get one built to take its place.

Even as the Carter County Commission considers a long-term solution for the rapidly filling landfill, immediate repairs are draining county funds.

The commission learned this week it needs to replace an engine on a compactor.

“It seems that every time we turn around something is going wrong,” said District 6 Commissioner Gary Bailey. “We checked today and to replace that engine we are looking at $37,000 for the engine and $4,200 to put it in.”

County Attorney Josh Hardin confirmed the repair could be handled as an emergency expenditure, but Bailey said replacement parts could take up to 14 weeks.

Budget Committee vice-chairman Aaron Frazier made a motion to set aside up to $42,000 pending documentation from the state that the equipment was indeed required for landfills to support an emergency need to replace the engine on the compactor.

The motion was approved by the commission.

Another item that was addressed included the safety of a two-tenths of a mile section of Old Milligan Highway which has not been properly maintained and has been an issue of discussion if the road upkeep belonged to the county or the city.

Hardin said the road was turned over from the state in 1968 and there had been no deed since that time.

Mark Blevins made a motion to adopt the section of highway for the county which was approved. A motion was made to provide $25,000 of funding from the unassigned fund balance to pave the road to make it safe which was approved by the commission on the vote.

Other items on the agenda for the commission included:
– Mayor Patty Woodby honoring the Carter County Humane Society began in 1982 by Bill and Katherine Armstrong and later taken over by Bob and Penny White for their long standing service to Carter County.
– Recognizing a Hampton and TCAT student for designing the Stoney Creek and Hampton Volunteer Fire Department floor plans.
– The appointment of David Bowers to the First Utility District and Mike McKinney to the Siam Utility District by Woodby.
– Woodby was named by Gov. Bill Lee as a local planning advisor for the area effective June 1.
– Voted to restore 50% of the local options sales tax based on average daily attendance to be distributed between schools in the county including students served by Carter County, Elizabethton, and Johnson City schools. The item was a referendum item voted on in 2008 by county voters but was stopped in 2021 after the commission voted to keep the full 50 percent.
– Dr. Robert Acuff informed the commission that after the June 7 Health and Welfare Committee meeting the committee should be completed with the ARP recommendations and will forward those to the Financial Management Committee.
– The commission voted to accept the bid of Construction Partners in the amount of $440,000 for the finance department renovations.
– Voted on a rule change proposed by Rules and Bylaws to hold presenters to 10 minutes unless prior approval is given by the chair for more time. The rule was put into place to keep presenters on topic. The item passed 21-3.
– Heard from Finance Director Carolyn Watson that the final insurance increase number was 13%. Employees will be meeting one on one with insurance representatives to find out what is available to them as well as be encouraged to follow up with their yearly wellness checkup.
– Attorney Hardin encouraged the commission not to engage in a meeting with the Carter County school board to attempt to negotiate funding for the new Hunter Elementary School project. He said they were more than welcomed to attend the meeting but any type of discussion to that magnitude would need to be conducted during a full commission setting.

The next Carter County Commission meeting will be at 6 p.m. on Monday, June 20.

Criteria, timeline set for hiring of new Director of…