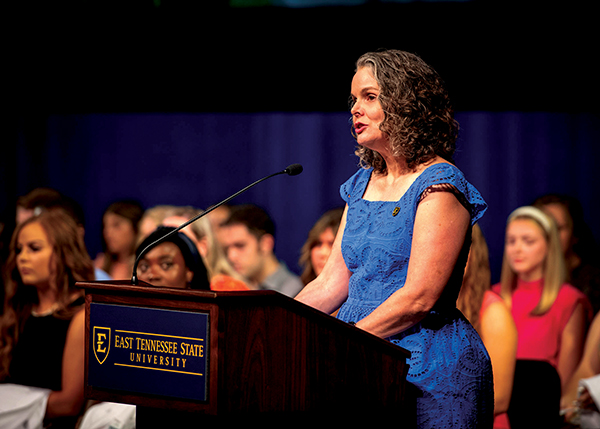 JOHNSON CITY — East Tennessee State University Bill Gatton College of Pharmacy welcomed 54 student pharmacists in the Class of 2026 with a traditional White Coat Ceremony today at the ETSU Martin Center for the Arts. The class arrived on Aug. 1 for Gatton Ready, a bridge program designed to help students acclimate to the rigors of pharmacy school, culminating in the White Coat Ceremony today.
“Class of 2026, you are on a career path that will allow you to serve, lead and impact your community in a wide variety of ways as student pharmacists,” said Dr. Debbie Byrd, dean of Gatton College of Pharmacy, during her address at the ceremony. “Like some of you, I am a first-generation college student, and I recall feeling the nervousness and excitement that you may be experiencing as I began my journey to becoming a pharmacist. But it was my desire to help patients and to serve the underserved that motivated me, even during the most challenging aspects of pharmacy school.”
The iconic white coat signifies a student pharmacist’s status as a health care professional and a tradition of humanistic care.
The Class of 2026 was cloaked by Byrd and special guest, Dr. Lucy Adkins Shell, executive director of the Tennessee Board of Pharmacy and a Gatton College of Pharmacy Class of 2014 alumna, who spoke at the ceremony.
Prior to serving at the Board of Pharmacy, Shell was the Tennessee Pharmacists Association’s (TPA) director of Pharmacy Practice Initiatives, including a term as interim executive director. She also served as the TPA’s executive resident in association management and health policy. Shell has led numerous grant, practice and education initiatives, leading to publications and the development of training materials for pharmacists and pharmacy technicians, as well as authoring chapters on pharmacy law. In addition, she worked in the community chain environment as a floater pharmacist. She is a current member of multiple state and national pharmacy organizations. Originally from Hopkinsville, Kentucky, Shell currently resides in Nashville with her husband, Eric Shell, a fellow pharmacist and Gatton Class of 2013 alumnus.
Other speakers included ETSU President Dr. Brian Noland; Dr. Kimberly D. McCorkle, provost and senior vice president for academics at ETSU; and Bailey Boyd, president of Gatton’s Class of 2025. Jonathan Holan, president of the college’s Class of 2023, administered the Oath of a Student Pharmacist.
Gatton College of Pharmacy was founded in 2005 by the community to train student pharmacists in order to fill a need in the region. Since then, the college has grown and matured into a national presence and enrolled high-quality students from across the country. The college’s faculty, student pharmacists and student organizations are the proud recipients of national awards and accolades for service, scholastic achievement and clinical training.
Learn more about Gatton College of Pharmacy at etsu.edu/pharmacy.