Sheriff’s request for raises for deputies

To the Editor:
Every day our Carter Country officers run the risk of being in a dangerous situation. We train them for the job, then another city or country recruits them at our loss because they are offered a better salary. Remember, this training isn’t cheap. The process is repeated. This cycle continues with the taxpayer footing the bills.
Wouldn’t it make more sense to train an officer and pay to retain that officer? Their experience would be ongoing instead of starting from scratch and costing another round of training for someone new. Any officer would feel more valued when being recognized with a raise.
And now we have funds to do just that. We need to raise their pay. New appraisals substantially increased the taxes due on county properties. New properties have been built as people come in waves to this area. Sales of merchandise is back to the pre-pandemic levels and money is becoming more and more plentiful as we recover. The officers should have enough money to support their families and the citizens should be able to have confidence in a well-trained squad of officers.
Now question yourself. Would you work for their pay, knowing there are dangerous people in our county? Would you work for their pay if you knew the next person you meet might be under the influence and have a gun pointed at you? Would you work for their pay if you had to save a person who overdosed?
Give the officers a raise. The money should already be there.

Don’t let offenses stop you from seeing family during holidays

Thanksgiving is a time to count our blessings 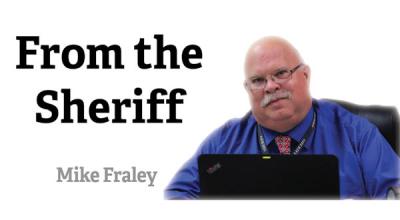