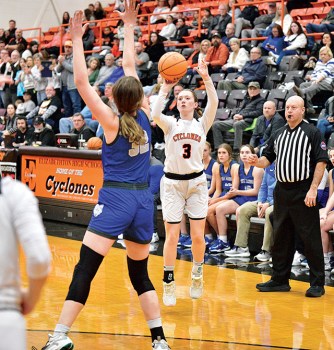 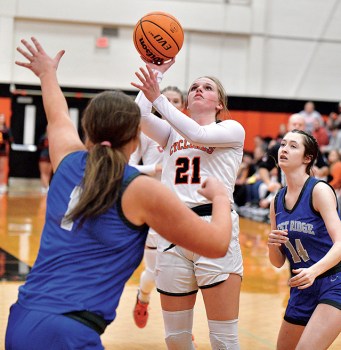 Star Photo/Ivan Sanders Elizabethton's Renna Lane pulls up for a shot in the paint over the outstretched hand of a West Ridge defender. 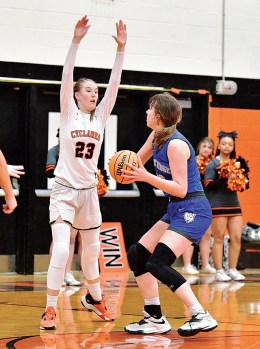 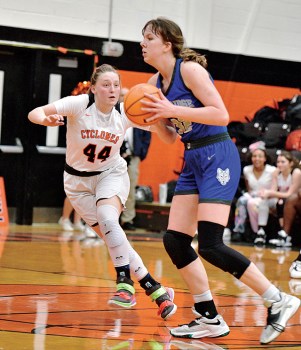 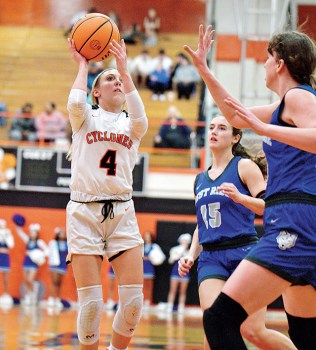 Star Photo/Ivan Sanders Elizabethton's Lina Lyon gets off a running jumper in the lane for a deuce.

STAR CORRESPONDENT
The Elizabethton Lady Cyclones didn’t play much like themselves in the first three-quarters of their contest against the visiting Lady Wolves from West Ridge during their Homecoming 2023 contest inside John Treadway Gym on Friday until a fiery tongue lashing from head coach Lucas Andrews during an early timeout in the fourth quarter.
After that timeout, the Lady Cyclones pulled it together to pull away from their visitors late in taking a 50-39 victory that ran the state’s fourth-ranked Lady Cyclones record to 18-4. West Ridge dropped to 11-12 on the season.
Both teams came out scrapping in the opening half as Elizabethton managed to offensively do enough to take a 24-19 lead to the locker room at intermission.
Lina Lyon continued to show why she is one of the top scorers in Northeast Tennessee as the senior guard paced the Lady Cyclone attack with 12 in the first half. Sharp-shooting guard Olivia Holly returned after missing time due to an ankle issue to gun in two treys in the half for six points while junior post Marlee Mathena worked hard inside to net four points in the first 16 minutes of play. Katie Lee added a pair of free throw tosses.
West Ridge’s attack was centered on utilizing its two bigs in the paint as Alexis Wood was giving the Lady Cyclones fits with her height in the paint to score six points in the first half. Fallon Taylor knocked down five points, including a long three, while Randi Smith added a trey as well.
The Lady Wolves came out of the locker room with some bite behind their howl as they pushed the Lady Cyclones while trimming the lead to three points heading into the third period as Elizabethton clung to a 32-28 lead. Taylor drained another trey for the Lady Wolves while Hood, Rachel Niebriessand Lilly Bates added a deuce each.
Elizabethton stayed in front thanks to six more points from Lyon and a field goal by Lee.
Not liking what he was seeing, Andrews rallied his troops early in the fourth quarter and the message was received loud and clear as the Lady Cyclones finally managed to pull away by outscoring West Ridge 18-11 in the final eight minutes of regulation.
Reiley Whitson and Lyon pitched in four points in the period, while Mathena and Holly totaled three. Renna Lane and Lee chipped in with two points apiece.
Lyon led all scorers in the game with a game-high 22 points. Holly and Mathena scored nine and seven points, respectively, while Lee finished with six. Whitson (4) and Lane (2) closed out the scoring for Elizabethton.
Hood paced West Ridge with 10 points, while Taylor was just one behind with nine points.