Wolves run away from Cyclones late 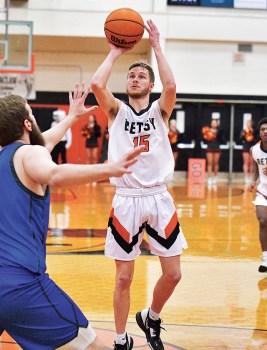 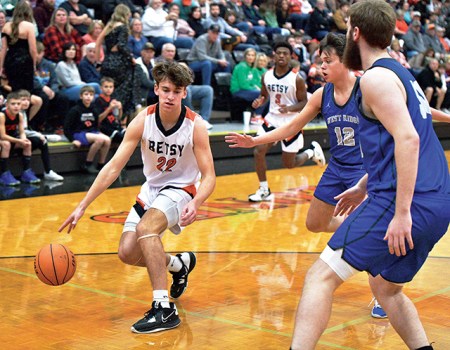 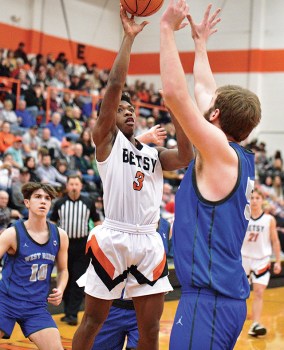 Star Photo/Ivan Sanders Nate Stephens is highly contested on this shot in the paint by the West Ridge defender. 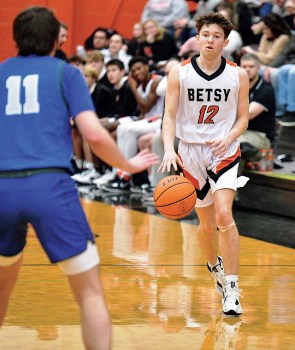 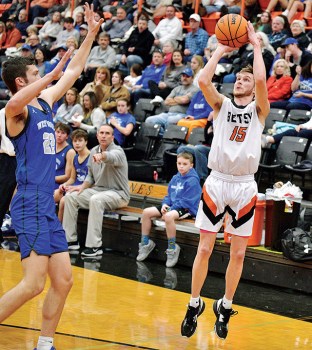 Star Photo/Ivan Sanders Dalton Mitchell guns in a trey during the Cyclones contest with the Wolves of West Ridge.

STAR CORRESPONDENT
The Elizabethton Cyclones continued their recent luck of falling behind early, battling back in the middle, and then falling late as they played host to the West Ridge Wolves during Homecoming 2023 festivities inside John Treadway Gym.
West Ridge put on a three-point shooting clinic in the first half to build a 37-26 lead, and after the Cyclones rallied in the third quarter to within four, the Wolves went on another big run in the fourth to win 75-55 over the Cyclones.
Will Harris hit three treys in the opening half, with Houston Sherry and Avery Horne adding two and one, respectively, to put the Wolves out front early. Post Dawson Arnold scored nine first-half points to pace West Ridge, while Wade Witcher contributed with three field goals for six points.
Dalton Mitchell continued his offensive leadership for the Cyclones as the senior accounted for 13 of the 26 points in the half. Will Churchill was also finding the range as he tickled the cotton for six points on two treys. Mason Ball added five in the first 16 minutes, while Jackson Hobbs picked up a deuce.
The Cyclones came out of the break and once again began a push toward the front as they cut the once 11-point advantage to four midway through the third period before the Wolves put together a string of baskets to push the lead back out.
Ball went to battle in the middle against Arnold in the quarter as the two big men went toe-to-toe, with Ball scoring 11 points in the period. Hobbs added a trey while Mitchell and Mac Paulson picked up a field goal each. Witcher helped to keep the Wolves in control by cashing in with seven third-quarter points, while Sherry and Parker Lemming added a three-ball each.
The push to overcome the Wolves advantage took its toll on the Cyclones as West Ridge managed to close out the contest with a 23-11 fourth-quarter finish that sealed the contest for the visitors.
Ball and Witcher finished with game-high scoring honors as both scored 20 in the contest.
Harris finished with 16, while Sherfey reached double figures for the Wolves with 11 points.
Mitchell finished with 19 points for Elizabethton with Churchill (6), Hobbs (5), Nate Stephens (3). and Paulson (2) closing out the scoring for ‘Betsy.