City set for a flock of T-Birds 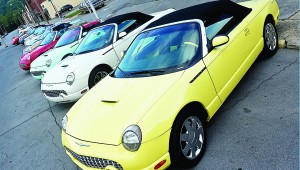 A 2011 event drew dozens of Thunderbirds to Elizabethton, and the Carter County Car Club is expecting similar numbers for its car show next week when the Retro Thunderbird Club rolls into town.

You better drive slow.
You better not fly.
You better look twice, I’m telling you why: The Retro Thunderbirds are coming to town.
The weekly Carter County Car Club car show will be extra special on July 26, when around 40 Ford Thunderbirds will converge on downtown Elizabethton.
Car Club member Ron McCloud said the Thunderbird owners will be in the region for an extended weekend of fun that will culminate with their visit to the weekly car show.
The Retro Thunderbirds will first be in Elizabethton on Thursday, July 24, when they will roll into the State Line Drive-in. On Friday, club members will pass through Elizabethton on their way to Damascus, Va. Then on Saturday, July 26, the club will set up on E Street to be a part of the weekly car show.
“It is a good blend of cars, older and newer Thunderbirds,” McCloud said. “We have owners come from all around the region and from across the country to be a part of this.”
McCloud said the Thunderbird owner that would be traveling the farthest is from Dallas, Texas. Owners will be coming from 14 states, including Texas, Oklahoma, Michigan, New Hampshire and Florida being the farthest.
This isn’t the Retro Thunderbirds’ first Elizabethton visit; they were in town July 2011.
Some traffic changes will accompany the club’s visit. The group will get a police escort from Beef O’Brady’s to the State Line Drive-in on July 24 and E Street will be closed 30 minutes early, at 4:30 p.m. on Saturday, July 26. It will remain closed an hour and a half longer, until 10:30 p.m., to allow the cars to be a part of the car show.

A woman entering a guilty plea to leaving the scene of the 2013 death of a pedestrian nearly collapsed while... read more