Next week, the Civil War returns to Carter County 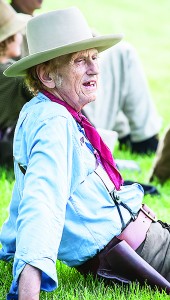 Re-enactors rest during a previous “Battle of Brooks’ Farm.” The Stoney Crek site will again come alive with the sights and sounds of the Civil War on July 26 and 27.

Look away! Look away! Look away! Dixieland!
The Rebels are coming and they are taking over a farm on Stoney Creek as reenactors gather to present the “Battle of Brooks’ Farm” on July 26 and 27.
Local historic re-enactor Grant Hardin said attendees can expect to see a variety of authentic demonstrations as part of the event.
“These are the things you will not see in the movies,” Hardin said. “This will be what life was really like during the Civil War.
“You’ll see the camp fires burning,” he added. “You will be able to taste and see what life was like for a soldier.”
This event is being held at Brooks’ Farm, at 1548 Blue Springs Road just off of Highway 91 in Stoney Creek. The home, built in 1820, will add a special touch to the event, Hardin said.
“You can be on a place that was actually a part of the war,” he said. “It was a mecca of sorts for the Confederates in the area.”
Brooks’ Farm was home to Reuben Brooks Jr. and his family and was one of the region’s larger farms, according to Hardin. “This was a true plantation,” he said. “He had such a big farm that the only way he could manage it was with slave labor. I believe that is one of the reasons he supported the Confederacy.”
Reuben Brooks Jr. was a supporter of the secessionist movement but died in the early days of the Civil War. His son, William Brooks, took over the farm and his father’s role in the Confederacy but he also died during the war. The manner of William Brooks’ death will be discussed during the reenactment at his old family homestead.
“He was on his way up Stoney Creek to recruit some people and was shot by a guerilla fighter,” Hardin said, adding that guerilla-style fighting tactics were common during the Civil War, especially in this area.
“I will be giving a demonstration on guerilla warfare, which was a very big thing during the Civil War,” he said. “When people think of war they think of soldiers and uniforms but that was not always the case. Much of the Civil War was fought by citizens, neighbors and folks who went to church together who ended up fighting and killing each other.”
Hardin said that type of fighting was one of the more gruesome aspects of the Civil War.
“It was horrible what some of the guerilla fighters saw and did,” he said. “Those men, well, you didn’t want to be caught up on the wrong side of them.”
Hardin said that between demonstrations, attendees will be able to walk through the camp and talk to the re-enactors and ask them questions about their roles, their weapons and the lives of soldiers during the Civil War. He said a tour of the historic Stover House, located on the Brooks’ Farm property, will also be conducted. The Stover House was owned by the daughter of President Andrew Johnson and was the site of the former president’s death in 1875.
The “Battle of Brooks’ Farm” reenactment is being presented by the 12th Tennessee Cavalry. The cost to attend is $4 per person per day with children under 5 admitted free. Members of the Sons of Confederate Veterans will receive half off the admission price. Proceeds from the event will go to St. Jude’s Hospital.

A scurvy crew of pirates … actually, Fine Arts Academy students … serves up a lesson in manners

Pirate Pete fights off invading buccaneers who want to steal his possessions. Arrgh, matey. Or maybe it should be paarrrrr-don... read more