With two foreign mission trips under his belt, would Gabriel Treadway go again? ‘If I get the chance’ 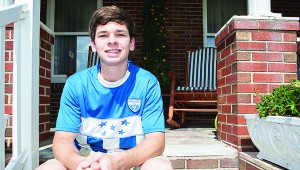 Elizabethton High School student Gabriel Treadway spent part of his summer vacation helping others.
That’s not so uncommon. Teenagers volunteer to help the less fortunate on a regular basis.
But Treadway’s journey took him a bit farther than the typical volunteer goes – he went to Honduras.
Treadway traveled to the Central American country on a mission trip with First Christian Church in Johnson City. And that journey – from July 7 to July 14 – wasn’t his first mission trip. When in fifth grade, he traveled to Mexico, another mission trip with his church.
“I wanted to have a new experience and to travel,” Treadway said of his trip to Honduras. “I wanted to do something good and I wanted to help out. I tried to be a light to the kids down there.”
Preparing for the trip meant fundraising to cover expenses and securing a passport.
Oh, then there’s stocking up on plenty of sunscreen and bug spray.
“You’ll definitely need those there,” he said.
After a three-and-a-half hour flight, Treadway landed in Honduras and was taken to the school site, where he and other mission trip volunteers worked to make beds and clear construction rubble from the area to make it safer for children.
“It was definitely different,” he said. “I noticed the kids were so happy with so little. They would come up and ask for food and water, but they would always be smiling. It was amazing to see.”
Treadway said they spent most of their time in Honduras working at the school.
In the free time they did have, he said he frequently played soccer with the children there, especially one little boy named Byron.
“Byron would come around a lot and would challenge us to soccer games,” he said.
During another break in the work, the group traveled to the beach where they enjoyed a fish-fry picnic with local residents.
Treadway said one big difference he noticed while in Honduras was that armed guards were stationed at checkpoints along the roads where they would conduct roadblocks and search vehicles.
“It was something we definitely weren’t used to,” he said. “When we were driving around, the police would do checks and there would be armed guards. It seemed to be a regular thing for them.”
Treadway’s favorite part of the trip was being able to spend time with the Honduran children who would come out to visit the missionary volunteers.
One game the local children especially liked was jumping in the volunteers’ wheelbarrows to demand races.
“The kids would jump in after we had dumped the rubble we were moving,” he said. “They would get in and they would want us to push them and race each other. They would start snapping their fingers and tell us ‘rapido.’ That means go faster.”
Treadway said it wasn’t necessary to understand Spanish for the trip. He said he knew a little of the language from his classes in school, and that a translator was usually with them to help with more complicated conversations.
“The kids would come up to us and say something simple, and then I would answer them and they would start talking faster,” he said. “I would have to tell them to slow down because I didn’t know enough Spanish to keep up.”
Treadway’s trip back to the United States proved to be just as eventful as his stay in Honduras. On the way back, the group was delayed by three separate car accidents in three hours.
He attributed that to the local driving style.
“The driving is pretty crazy there,” he said. “There were only two lanes of traffic, one each way. People would cross the lanes to pass each other and the roads were in pretty bad shape.”
Then on the flight back, Treadway’s plane had to fly through a storm, which added some high-tension moments to the air commute.
“There was turbulence, and the lighting was flashing all around,” he said.
Honduras likely won’t be the last mission stop for Treadway. He said he plans to go on more trips if his church continues to go, especially if given the opportunity to return to Honduras.
“If I get the chance, then I will definitely go again,” he said.

The Brooks Farm site has a long – and tragic – history. Built in 1820, the house is located at... read more