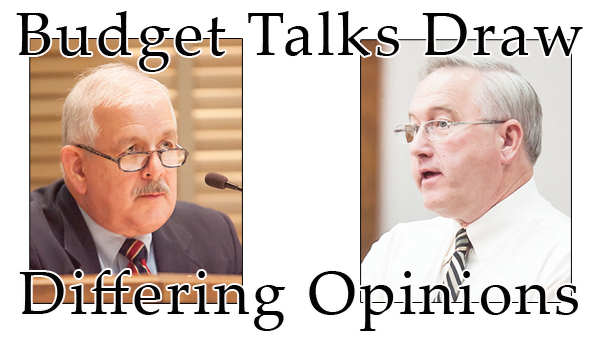 The legality of the Carter County Commission’s Monday night vote, setting a tax rate for the new fiscal year, is being questioned.
Commissioner Nancy Brown challenged the legality of decreasing the amount of funding for debt service from the amount proposed by the Budget Committee. She questioned the action after fellow Commissioner Buford Peters made a motion to remove the proposed additional 12 cents in funding for the debt service.
“What we are doing is illegal after the public hearing,” Brown said, referring to a recent opinion by the Tennessee Attorney General that said counties could not decrease the proposed debt service funding recommended by the budget committee after the budget had been presented for a public hearing.
That opinion, number 14-09, was issued in response to a question: “Does a county commission operating under the County Financial Management System of 1981, codified (in state law) violate (state law) if the county commission votes to reduce debt service portion of the budget proposed by its budget committee after the budget committee holds a public hearing on its budget proposal and submits that proposal to the county commission?”
The opinion issued by the State Attorney General on the question contains only one word in reply: “Yes.”
In the analysis portion of the opinion, Tennessee Attorney General Robert E. Cooper Jr. explains the law surrounding the County Financial Management System of 1981 as well as state law regarding budgets.
“The CFMS requires the budget committee to: fully provide in the budget for all requirements for debt service, interest and bond maturities and for any cash deficit in any fund at the beginning of the fiscal year, and … propose a tentative tax rate to fund such budget,” the opinion issued by Cooper said.
The opinion goes on to state that after the committee publishes notice of the budget and holds a public hearing on the budget, the committee must then present the budget to the county commission at its July meeting.
“The CFMS expressly provides: The county legislative body may alter or revise the proposed budget except as to provision for debt service requirements and for other expenditures required by law,” the opinion by Cooper said. “Thus, pursuant to the explicit provisions of the CFMS, a county commission in a county operating under CFMS may not vote to reduce the debt service portion of the budget proposed by its budget committee after the budget committee holds a public hearing under (state law) and presents its proposed budget tot he commission.”
After Brown questioned the vote’s legality based upon the opinion, Commission Chairman Tom “Yogi” Bowers said he did not think the action of the county was illegal, and the finding by the attorney general was “just an opinion.”
Carter County Mayor Leon Humphrey also spoke up and challenged the legality of changing proposed funding for debt service.
“You do not alter debt service once the budget has been presented to a public hearing. It is illegal,” Humphrey said, adding the legal issue was behind his veto of the 2013-2014 fiscal year budget passed by the commission. He said the Commission had changed the proposed level of funding for debt service at that time and he vetoed the budget because he felt the action was illegal.
“It’s not just an opinion; it is the state attorney general’s opinion,” Humphrey said.
“It has not been challenged in court,” Bowers insisted. “That is just one attorney’s opinion.”
Brown called on County Attorney Keith Bowers to give his opinion on the issue of decreasing the proposed debt service funding.
“Your safest approach is not to change the debt service budget from what the budget committee proposed,” Attorney Bowers said, adding that would place the county “on the most solid legal ground.”
After the discussion on the legal issue, the Commission voted 13-9 to set the tax rate at $2.45, which included a decrease in funding to the debt service from the amount recommended by the Budget Committee.

City set for a flock of T-Birds

A 2011 event drew dozens of Thunderbirds to Elizabethton, and the Carter County Car Club is expecting similar numbers for... read more