Despite veto, work goes on 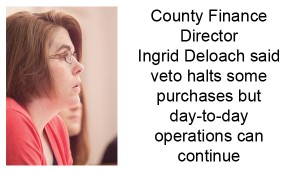 County departments are in a holding pattern after the veto of the budget approved by the County Commission.

On Wednesday, Carter County Mayor Leon Humphrey vetoed the budget resolution and tax levy, which the County Commission approved Monday.
Carter County Finance Director Ingrid Deloach said county operations can continue in light of the veto, but with some limitations.
“We are still on a continuing budget,” Deloach said, adding the day-to-day operating expenses of the county such as payroll, feeding prisoners and other typical operations can proceed as usual.
“We just can’t do anything out of the ordinary,” she said, adding that some purchasing is also limited until a budget is approved.
The current budget situation in Carter County mirrors actions taken last year.
Members of the County Commission passed the 2013-2014 fiscal year budget on July 15, 2013, and three days later that budget was vetoed by Humphrey. On July 26, 2013, the commission held a special called meeting where members voted to override the mayor’s veto.
One entity affected by last year’s veto was the Carter County School System.
Director of Schools Kevin Ward told the Elizabethton Star in July 2013 that the system’s preparations for the 2013-2014 school year would be delayed as a result of that veto. At that time, he said purchases of items needed for the school year were delayed because the system was unable to obtain purchase orders.
The Star attempted to contact Ward on Wednesday to see how the current budget veto would affect the schools, but messages left for him were not immediately returned.

Elizabethton’s Snap-On Tools plant has been chosen to receive the Governor’s Award of Excellence for Workplace Safety and Health. The... read more