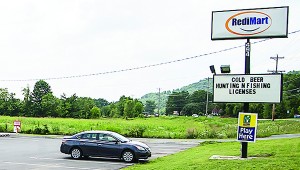 Photo by Brandon Hicks
Tom “Yogi” Bowers, chairman of the Carter County Beer Board, said the presence of a convenience store that sells beer, in the foreground, won’t impact the proposed construction of a new middle school, on land in the background.

It boils down to a simple, “They were there first.”
A convenience store that sells beer on property next to land purchased for a proposed middle school in the Stoney Creek area will present no legal issues for the project, according to the chairman of the county’s Beer Board.
Tom “Yogi” Bowers, who chairs not only the Beer Board but the County Commission, addressed concerns raised by two county commissioners during the group’s meeting on Monday. During the meeting, commissioners Charles Von Cannon and John Lewis questioned whether a school could be built on the proposed site because the adjacent property houses a business that sells beer for off-premises consumption.
On Thursday, Bowers told the Star the county’s ordinances regulating the sale of alcoholic beverages would not prohibit the construction of a school on the property on Highway 91 near the Elizabethton Airport.
“If I already have an established beer store and someone wants to come in a build a school or a church next to it, they can,” Bowers said.
According to Bowers, the county’s beer permit regulations only restrict the issuance of new beer permits to businesses wishing to locate near existing schools, churches or residences. He said the distance rule does not regulate against churches or schools that wish to locate near a business with an existing beer permit issued through the county.
The distance rule currently in place in the county was enacted by the County Commission in October 1998 and states “there is hearby enacted a 700 foot rule for the sale of beer and like beverages in Carter County. This rule provides that no permit for the sale of beer and like beverages will be issued for any location within 700 feet to a school, church or place of public gathering.” That distance is measured between the closest two points of the buildings involved, Bowers said, not the distance between the property lines.
Bowers also addressed concerns that locating a school on the property would cause the revocation of the store’s beer permit and possibly force it out of business.
“Those folks would be grandfathered in,” he said, adding that state law prohibits a county from revoking a legally issued permit simply because a school or church locates next to the business holding the permit.
Director of Schools Kevin Ward said he did not foresee any issues with the property.
“There is a 10-foot security fence that will go around the school and goes all the way around the property,” Ward said. There were will be other security measures – such as a door-monitoring security system – which will help keep the school safe from unwanted guests.
Ward said he believes the location of the convenience store wouldn’t affect the school, its operations or the students, because the beer sold at the store is not consumed onsite.
“Maybe from a perception it is an issue for some,” he said. “If it was something that had drinking on premises, like a bar, then I would share that concern.”

Photo by Brandon HicksA firefighter carries supplies to the site of a hazardous material spill near downtown Elizabethton Friday. A... read more