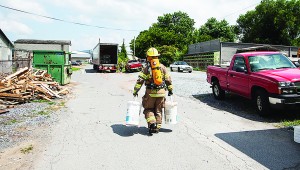 Photo by Brandon Hicks
A firefighter carries supplies to the site of a hazardous material spill near downtown Elizabethton Friday.

A chemical spill in downtown Elizabethton Friday afternoon led emergency officials to shut down the area and evacuate surrounding residences and businesses.
The hazardous material spill happened shortly after 2 p.m. in the alleyway behind Norwell, which is at 130 E. Elk Ave.
According to Elizabethton Fire Department Capt. Steve Murray, a Holland Freight truck was making a delivery to Norwell when the spill was detected. The driver of the truck opened the back doors on the truck and realized a container aboard the truck containing 275 gallons of a corrosive liquid – identified as sodium hydroxide – had been punctured, Murray said.
The liquid began spilling out of the truck and the driver, whose name was not released, called 911. The EFD responded to the scene along with the Elizabethton Police Department, the Carter County Rescue Squad’s HazMat Team and the Carter County Emergency Management Agency.
Murray said the container, which was destined for Snap-on Tools, had been punctured near the top, so the entire contents of the container did not spill.
Emergency personnel set up a perimeter around the area and people within 150 to 200 feet of the spill were evacuated from their businesses and homes.
EFD Chief Barry Carrier said the transport company sent a cleanup team from Roanoke, Va., to assist local authorities with the cleanup. “It will be cleaned up before we leave the scene, without any costs to the taxpayers if at all possible,” Carrier said.
Traffic on Elk Avenue resumed on Friday afternoon but Carrier said some side streets remained closed for the duration of the cleanup, which ran into the evening hours.
Carrier commended the emergency personnel who responded for their quick response and their cooperation in containing the incident and cleaning up the spill.
“Capt. Murray and his crew did an excellent job,” Carrier said. “These guys all did an excellent job on this scene. All of the different agencies worked well together.”
The Centers for Disease Control and Prevention website notes that sodium hydroxide is also known as caustic soda, lye, soda lye and sodium hydrate. The Tennessee Department of Health website notes that it is used as a major ingredient in drain and oven cleaners. It is also used in chemical manufacturing, oil refining, hydraulic fracturing, water treatment and metal processing, as well as the manufacture of fabric, plastic wrap, paper and soap.