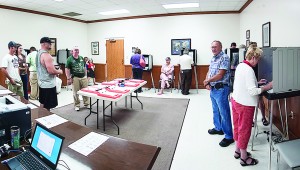 Photo by Brandon Hicks
These voters are some of the nearly 2,500 residents to take advantage of early voting to cast their ballots.

Early voting is in full swing in Carter County, as nearly 2,500 people lined up to cast their ballots in the first week.
Administrator of Elections Tracy Harris said when the polls closed on Thursday a total of 2,483 voters had taken advantage of early voting. She said 278 absentee ballots were received, bringing the total number of votes cast so far to 2,761, with one week of early voting left to go.
In comparison, 4,240 ballots were cast through absentee and early voting during May’s primary election.
Many who showed up to cast their ballot early found themselves waiting in line. However, Harris said, “the long lines are starting to shorten.”
So far only one machine had experienced an issue – one of the buttons became stuck. The machine was fixed and has worked fine since, she said, adding the voter was allowed to restart the ballot process on a new machine and the vote in the malfunctioning machine was cancelled out.
Prior to the start of early voting, members of the election commission expressed concerns regarding voters bringing campaign materials into the polling places. While Harris said she is not aware of any poll workers having issues with campaign materials being brought in, she has heard complaints on other matters.
Calls have come in from people who are having problems with campaign workers obstructing traffic near the courthouse, Harris said.
“People have called in and complained they can’t see around the corner and people are standing in the street,” she said. “There is nothing we can do outside the 100-foot boundary.”
While Harris can’t do anything to change where campaign workers stand, she said there will be one change in the way votes are counted on election night for the August general election.
Previously, canvassing of the ballots was not conducted until the day after the election. But, with this election, because of the number of write-in candidates seeking major county offices, Harris said the Election Commission will begin the canvassing process on election night once the polls close.
All write-in votes must be hand-counted. While the machines give the number of write-in votes, she explained, the ballots must be hand-counted to determine who the write-in vote was cast for.
Canvassing is anticipated to be a lengthy process with the August election because of four certified write-in candidates seeking election.

Randy Johnson A Carter County man was sentenced to 25 years in prison in connection with a 2013 incident where... read more