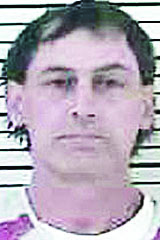 A Carter County man was sentenced to 25 years in prison in connection with a 2013 incident where he was accused of kidnapping and assaulting his girlfriend.
Randy Wayne Johnson, 43, of Elizabethton, received the effective 25-year sentence during a court hearing on Thursday. Johnson entered a guilty plea in June of this year to four of the charges against him. He was found guilty of the remaining three charges during a bench trial.
As part of the plea agreement, Johnson received a sentence of 11 months and 29 days each on convictions for second offense DUI, third offense driving on a suspended license, and simple possession of Schedule II drugs. He also entered a guilty plea on a charge of felony evading arrest and received a sentence of two years on that conviction.
During the bench trial before Judge Robert Cupp, two charges of aggravated assault were downgraded to two counts of simple assault. Johnson received sentences of 11 months 29 days on each of those convictions.
Johnson was also found guilty during the bench trial of one count of especially aggravated kidnapping, which yielded a 25-year sentence. All of Johnson’s sentences will run concurrently, resulting in an effective sentence of 25 years total for all the convictions.
As part of the sentencing, Johnson was classified as a “Violent” offender. This means Johnson would have to serve 100 percent of his sentence before he is eligible to be released from prison.
The charges against Johnson stem from an incident on March 19, 2013. Officers of the Elizabethton Police Department, and later the Carter County Sheriff’s Department, pursued a pickup truck after a woman called 911 and reported she was being held in the truck against her will and the driver of the truck, later identified as Johnson, was assaulting her.
“Dispatchers then advised that they had an open line in the vehicle and could hear the female subject begging for the driver to stop and let her out,” said CCSD Sgt. Nick Andes in his report on the incident. “I then observed the female subject through the rear window of the truck waiving and motioning for help.”
Officers continued the pursuit of the truck along Stateline Road, onto Highway 19E, then onto Long Hollow before the vehicle turned onto Gap Creek Road, where the truck was eventually stopped at the intersection with Tester Road, Andes said. Officers were then able to take Johnson into custody and began speaking with the victim.
Andes said the woman told him she and Johnson began arguing in Johnson City while driving to Elizabethton and during the trip, the argument turned physical. She said Johnson struck her in the face multiple times.
“(The victim) was bleeding profusely from her mouth and nose while recounting her story,” Andes said in the report, adding he observed blood splatter in the vehicle. “(The victim) further stated that somewhere in Carter County Mr. Johnson took a large black knife, held it to her throat and threatened to kill her.”
“I did observe a laceration to the right side of (the victim’s) neck that was consistent with her statement,” Andes added. “(The victim) stated that during the entire ordeal she pleaded with Mr. Johnson to let her go but he refused.”

Photo by Brandon HicksTom “Yogi” Bowers, chairman of the Carter County Beer Board, said the presence of a convenience store... read more