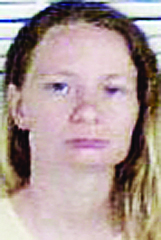 A tip from Google sparked an investigation that led to a Hampton woman pleading guilty in federal court to producing child pornography by using her three children.
Crystal Renee Dawn Poore, 32, entered a guilty plea on Monday in U.S. District Court for the Eastern District of Tennessee at Greeneville to three counts of production of child pornography.
A sentencing hearing has been set for Oct. 20 at 1:30 p.m. in U.S. District Court.
Poore faces a minimum prison term of 15 years and not more than 30 years in prison on each of the three counts. Federal sentences are not subject to parole.
In July 2013, a federal grand jury handed down an indictment against Poore charging her with three counts of production of child pornography. That indictment was the result of an investigation by the Knoxville Police Department’s Crimes Against Children Task Force with assistance from the Carter County Sheriff’s Department.
“While we are saddened about the abuse these children endured, we are very grateful that the dedication of the Knoxville Police Department Internet Crimes Against Children Task Force resulted in the crimes being detected and the children quickly rescued,” said U.S. Attorney Bill Killian in a released statement.
A factual basis filed in U.S. District Court details the investigation and the crimes Poore was charged with.
According to that court document, the investigation began on July 2, 2013, when the Knoxville Task Force received two cyber tips from the National Center for Missing and Exploited Children. Both of those tips were submitted to the center by Google Inc., regarding a Google/Picasa account it said contained nearly 70 images believed to be child pornography.
Knoxville police began an immediate investigation — interviewing Poore on the same day that the complaint was received, the court document said.
According to the factual basis document, Poore admitted to investigators that the photographs featured images of her children – who were ages 2, 6 and 8 at the time of the abuse – and admitted she had taken the photographs.
“Poore stated that she would hold the phone in one hand and take the picture while having sexual contact with her children,” the court document said. “Poore advised this was her personal love for her children and she thought she would capture it.”
In addition to the federal charges filed against Poore, on July 15, 2013, a Carter County grand jury handed down a state indictment charging her with aggravated rape of a child, three counts of rape of a child, four counts of incest and eight counts of aggravated sexual battery. The state charges against Poore stem from the same investigation.
No court proceedings have been set for the local charges at this time due to the federal case taking precedence over the local case.

Everyone loves a holiday – especially a holiday from taxes. Tennessee’s sales tax holiday begins Friday at 12:01 a.m. and... read more